Rampage of the Dragon Queen

Three days later…
He waited alone several miles off the People’s Road, having left his praetors and servants behind. They were carefully hidden and he had no fear that they would be found by her. They were capable, well trained and smart enough to know when they would be no help. Plus they, like all in his city, were expendable. He had no fear for he did not care for them. He did fear what was about to happen, for a threat such as this had not been seen in the last 12 centuries. He feared meeting the other two, for they had not meet since the fall of Dregoth some 1700 years ago. Still, he was a powerful defiler and master of the Way and would not be easily defeated this day. He was, afterall, Andropinis the Dictator of Balic. 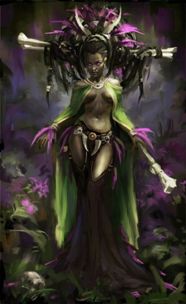 Her keen eyes spotted the old man and saw that he appeared fit and well. She could tell that he had gained in power since their last meeting, the golden and slightly reptilian features gave that away. She guessed, correctly, that she had progress further than he had and felt a moment of pity for Andropinis, for this encounter might prove too much for him. She felt only a little hesitation as she stopped near him and nodded slightly. The spirits she had consulted prior to their departure all agreed that this was where the confrontation would take place. The hot sun burned down on her dark skin, but she barely noticed – she was Lalali-Puy, the Oba of Gulg and such mundane forces were not a concern.

The bright light and hot sun was a stark contrast to the dark and cool libraries that Nibenay had spent time in during the majority of the last millennia. He was loathe to leave them behind and other plans of his were coming to close to completion, but the situation demanded his attention and the others would need his assistance in order to defeat their former ally. She had tried to accelerate the process and succeeded. She neither remembered or cared about the insanity that followed such a transformation and that made her very dangerous. His path was safer, his path would not destroy the rest of the world, he only had to be patient.

Andropinis and Lalali-Puy were visibly startled by Nibenay’s appearance. They knew he had grown in power but had not realized the extent. He towered above them and wore his draconic appearance with pride. “Where is Unyess?” Nibeany asked without any attempt at courtesy.

“You know she be ’ere very soon. Da spirits never been wrong before; they no be wrong now. I sure, you know dis.” Lalali-Puy responded with not attempt to conceal her dislike for Nibeany.

“Of course I have methods, Inenek, and my results agreed with yours, which is the only reason I’m here. If this had been another of you endless attempts to deceive me, we would not be speaking now.”

“We did.” Andropinis interrupted. “We agreed to deal with Uyness and put an end to her rampage before she can do any more damage. She will be here any moment, if your divination is accurate. Then we can be on our way.”

“Only after we exchange information regarding the adventurers who failed to stop her.” Nibenay reminded the others. “They are a variable that we have not accounted for. If what we have ascertained is true, they will have much to answer for.”

“O’ly one of us be gettin’ to them first, and da spirits say dat it be me.”

A disturbance on the horizon stopped their conversation short. Moving quickly eastward, the shape grew larger and larger. It was unmistakable, it was Abalach-Re the Dragon Queen.

Abalach-Re looked down at the three fools who dared stand against her. Despite her insanity, she knew the faces of the three but did not care that they had stood together to overcome impossible threats before. She cared nothing for their history and she cared nothing for the future. The hatred in her knew no limits and would not be satisfied until she had consumed everything. The Crescent Forest would be a fine starting place. All she had to do was eliminate these three and she would be unstoppable.

She flew down with powerful thrusts of her wings straight towards Lalali-Puy, but changed direction at the last moment and turned on Andropinis, catching him offguard. “Die old man!” she screamed and unleashed a torrent of attacks, blasting him backwards. He was completely unprepared for the power she possessed and she continued to assail him, attacking all of his defenses.

Lalali-Puy countered with her own attacks, but found that they were far less effective than she expected. Despite unleashing a gale of spirits, Abalach-Re remained relatively unharmed. Nibenay fared only slightly better, lashing out psychically and dazing the dragon queen. Andropinis managed to stay afoot and used his powers to not only attack, but also to infuse his two allies with strength and power, while summoning the spirits of loyal Balican soldiers to guard him.

Eventually Andropinis’ defenses failed and he was briefly disabled by her attacks. After regaining his footing, he worked to stay at a greater distance, outside the range of Abalach-Re’s powers but still close enough to able to affect her. Nibeany managed to keep her immobilized with his relentless attacks and his own shroud of shadows kept her from attacking him. Lalali-Puy bore the brunt of the dragon’s attacks, but it was only a matter of time before the battle was concluded.

Nibenay, Lalali-Puy and a severely injured Andropinis stood over the lifeless form of Abalach-Re. The ground around them was barren and covered in black ash which stirred in the slight breeze. They regarded her with mixed feelings, for while she had to be stopped, her death was another reminder that the world was changing and that their power was not as absolute as it once might have been.

Lalali-Puy, without a word, bent over the corpse and pulled out a long obsidian dagger. She reached down and cut out Abalach-Re’s heart from her chest. She quietly stowed it in a thick leather pouch at her waist and then returned to the others.

As they rested and tended to their wounds, they discussed what they knew of a group of adventurers. Each had heard different stories form their spies and informants. Other information had come through merchant houses and dune traders who had seen and encountered them. This group, originating in Tyr had shown themselves to be resourceful, powerful and lucky. None of the three knew what the groups goals were, but each had a strong desire to find them for their own purposes.

If the rumors were true, this group was actively working to destabilize the existing power structures and succeeding rather effectively. The sorcerer-kings had spent too long trying to maintain a delicate balance and if this group thought they could disrupt the balance without consequences, they had made a mistake. A mistake that could ruin everything.

Rampage of the Dragon Queen

I'm sorry, but we no longer support this web browser. Please upgrade your browser or install Chrome or Firefox to enjoy the full functionality of this site.