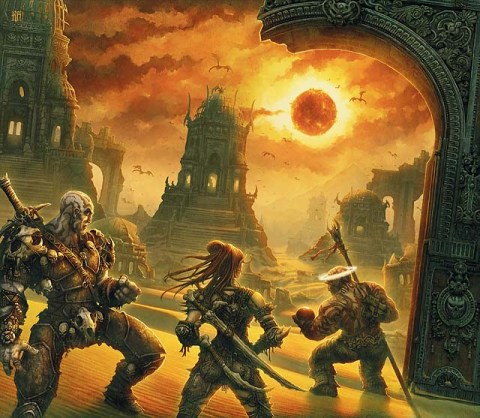 Welcome to the brutal world of Athas; a post-apocalyptic world ravaged by magic and ruled by tyrant sorcerer-kings, where simple survival is a daily challenge.

The information below is a quick primer for players. It highlights the major differences between the world of Athas and other fantasy worlds the players may be familiar with. Many of the things players might expect to see in a fantasy setting are missing from Athas, and those that still exist are not what one would expect. The following eight characteristics have been used to describe the world of Dark Sun in those terms.

The World is a Desert: The remnants of civilization on Athas exist in a hot and arid region of the world. There are all types of deserts: sand dunes, salt flats, stony wastes, rocky badlands, thorny scrub lands, and worse, all beneath a crimson sun. Temperatures routinely exceed 100 degrees by midmorning and can reach 130 degrees or more by late afternoon. Hot winds blow up dust and sand, offering no relief from the heat.

The World is Savage: Life on Athas is brutally short for most, as all manner of monsters, inhuman and human prey on everyone in an attempt to better their lives. This is a fact of life, outside or inside the cities. Slavery is widespread, human trafficking of all sorts and brutal gladiatorial matches claim thousands of lives every year.

Metal is Scarce: All the natural resources of the world were squandered thousands of years ago, including metal. Now, most arms and armor are made of bone, stone, wood, and other such materials. Steel weapons are almost priceless, weapons that are rarely seen let alone owned.

Arcane Magic Defiles the World: In the world of Athas, to use arcane power, energy must be taken from the living. Plants wither to black ash, crippling pain wracks animals and people, and the soil is sterilized; nothing can grow in that spot again. Reckless use of magic during genocidal wars thousands of years ago turned the world from a lush green paradise into the wasteland it is today. Those who use the arcane power source are viewed as evil and persecuted across Athas.

Sorcerer-Kings Rule the City-States: Each of the great city-states, save one, has been ruled over by the sorcerer-kings for centuries, none alive remember a time without them. All are powerful defilers and brutal oppressors of their subjects, though some are subtle in their tyranny. The sorcerer-kings govern via their templars, who they grant many powers.

The Gods are Silent: In the ages past, when the land was still fertile the gods were known on the world of Athas. Today the only evidence of the Gods existence is in the crumbling ruins hidden under the sands. Primal and psionic power sources have come to prominence with the departure of the divine.

Fierce Monsters Roam the World: The animals and monsters of the world have been hardened by thousands of years of exposure to harsh environments. Gone are most of the mammals that are familiar sights on other worlds, replaced by reptilian and insect creatures that fight to survive in the dying world.

Familiar Races Aren’t What You Expect: Long ago the Cleansing Wars destroyed many of the races in the world; gone are the gnomes, goblins, kobolds and ogres (along with many more). The races that survived had to adapt and now have little resemblance to their kin on other worlds. Elves have become nomads, merchants and thieves. Halflings are fierce cannibals who kill all who dare to enter their forests.

Much of the information in this site is a record of what has been learned by the player characters, and as such is heavily paraphrased from the numerous Dark Sun publications, all of which are owned by Wizards of the Coast. For all the information on these topics the original source material should be consulted.

I'm sorry, but we no longer support this web browser. Please upgrade your browser or install Chrome or Firefox to enjoy the full functionality of this site.