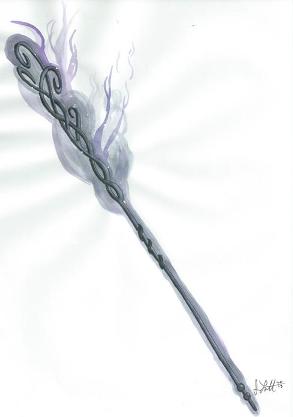 Description
This staff appears to be made from twisted strands of smoky black glass, but it’s harder than steel. Anyone who wields the staff gains a shadowy aura about them and becomes more resilient to necrotic effects.

History
The Shadowstaff was recovered by Vinara from the wreckage of the Fey Engine designed to drain the life from the Lands Within the Wind. She gave it to Gwyn who was more capable of understanding its powers.

Clearly not originally part of the Fey Engine, it appeared that Dregoth incorporated it into the device but for what purpose remains a mystery.