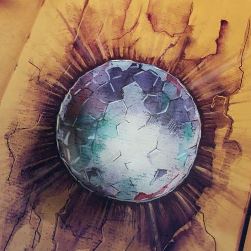 The Stone was cut and fashioned by unknown hands. It shines of its own inner light appearing as sparks of white radiance, shot with glints of the rainbow.

History
Virtually nothing is know about the Stone or its history. The Shadow King is now in possession of it after Elleandra and her companions stole it from Lalali-Puy’s dungeons beneath Gulg.

According to the Shadow King, Lalali-Puy was intending to use it to ensnare all of the spirit of the Crescent Forest and if successful would have gained a serious advantage in ongoing conflict between Gulg and Nibenay.