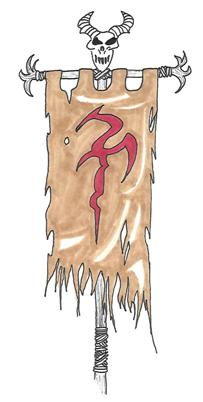 Description
The Standard of Arkhosia appears to be a simple banner attacked to a pole of oak. A skull of an unknown creature, presumably an ancient foe of the clan, is mounted atop the pole. The banner itself is worn and tattered but the stylized symbol of a dragon is still intact. Those in its presence feel a sense of empowerment when the banner is unfurled.

History
In one of the last great battles of clan Arkhosia, a dray regiment held a fortress against multiple legions of their enemies. When the battle was over, every warrior had fallen, except for a single dray.. Wounded, he still lifted his commander’s tattered standard before he set out for home. His people kept the banner as a sign of the victory, and it disappeared into legend.

The standard was recovered from a ruined fortress of the Arkhosian Clan deep within the Black Spine Mountains by Elleandra and presented to Iorskan. Iorskan was killed by Nibeany and it is assumed that the sorcerer-king is in possession of the standard.