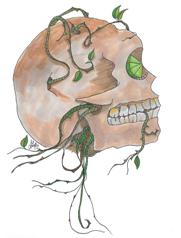 Description
This artifact is a human skull, browned with age. The teeth are chips of obsidian, and each eye socket contains a large emerald. A living vine snakes its way through the skull. Although the skull appears weathered and fragile, it is indestructible.

History
The skull is all that remains of Dorag Thel, an ancient druid of Athas from the days before the world became a wasteland. Dorag warned about the adverse effects of defiler magic, but to no avail.

After Dorag’s death, preservers venerated him as a visionary, and he became, in death, a sort of patron to the early Veiled Alliance members.

Following the treachery and death of Li-Am, the Skull was retrieved by Elleandra.