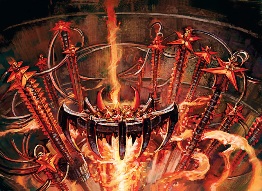 Description
An intricate contraption of spinning platinum cables and black iron rods set with hundreds of blazing gems all mounted on a stone and rusted iron disc. When first discovered the engine was held aloft on a crackling pillar of energy.

History
This device was found in the Shadow Tomb in Gray by Elleandra and her companions. It has been speculated that the device was draining the energy of the plane and channeling it to another location.

Like the Fey Engine, there are many siimilarities to the magic of the Ziggurat of Kalak, suggesting that it was created by dragon magic.

The Shadow Engine is believed to have been created by Dregoth but was destroyed by Jarvix and his allies in the Shadow Tomb.