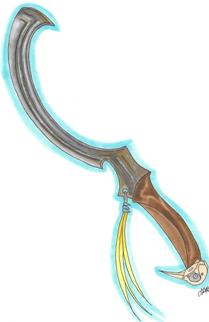 Description
This long, broad-bladed sword features a bone hilt and enchantments that suppress the auras of enemies.

History
This is one of nine swords crafted by the Veiled Alliance in an attempt to create a weapon capable of killing the sorcerer-kings. The Veiled Alliance was infiltrated by agents of Kalak and the swords were scattered to prevent them from falling into his hands.

The materials and craftsmanship suggest that it was not an artifact from Tyr’s distant past, but the powerful enchantments are unlike anything that this age has to offer.

This sword was wielded by Culler until her mind became unhinged and she was defeated by Iorskan who claimed the blade for himself.

Following the death of Iorskan at the hands of Nibeany, it is presumed that the sorcerer-king has taken possession of the sword.