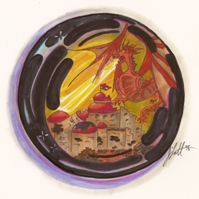 Description
A medium sized obsidian orb that is perfectly round and utterly flawless, it is just small enough to be grasped in a single hand. This obsidian sphere’s reflective surface sometimes shows scenes of draconic transformations or images of the current location of others of its kind.

History
The first orb was recovered following the battle to free the city of Kled from the army of Urik led by Maetan Lubar. Maetan used the orb in combat and it was subsequently claimed by Elleandra. It is not know where Maetan acquired the orb.

A second orb was found in the chambers beneath the Golden Tower and recovered by Elleandra and united with the first orb she recovered.

A third orb was found in the possession of the wizard Evan Moreau. He traded it to Elleandra for books and scrolls recovered from the ziggurat in Kalidnay.

The fourth orb was merged with the others while it was part of Dregoth’s Shadow Engine.

The fifth orb was revealed to be in the possession of Absalom in the ruins of Giustenal.

All five orbs were combined in New Giustenal by Li-Am. The combination of orbs returned Kalid-Ma to life and cracked the orbs.