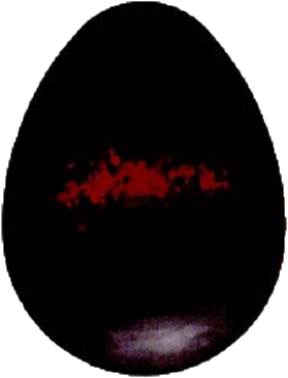 Also known as the Dark Lens.

Description
The Dark Lens is a polished obsidian egg-shaped orb about the size of a small kank. The surface of the Dark Lens is flawless, and its blackness is absolute, darker than the deepest obsidian mines of Athas. Through its glassy skin can be seen an occasional streak of scarlet, often vanishing one instant and reappearing again in a different location. Even beneath the most intense light, the surface of the Dark Lens appears as nothing but inviolable gloom. The lens radiates intense heat upon its surface, a direct result of its incredible power. The Dark Lens is heavy, weighing about 300 pounds.

History and Rumors
Stolen by Jo’orsh and Sa’ram from the Champions of Rajaat and brought to the island of Mytilene.

According to Sacha and Wyan, the Dark Lens is essential to defeating the Dragon and bringing about a new Green Age.