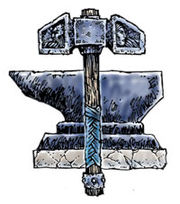 Moradin is mentioned in the Scrolls of the Sonlinor as a god of the dwarves. He was revered by them during the Green Age until the gods were defeated in the Dawn War.

Believed to have been responsible for creating the Crystal of Ebon Flame and safeguarding the Chained God from the primordials.

Also known as the Soul Forger and Dwarffather.

According to the research done in the library of Evan Moreau, Moradin is a well-known and revered god of the dwarves who grants powers and abilities to his followers. No mention of his involvement with the Chained God could be found.