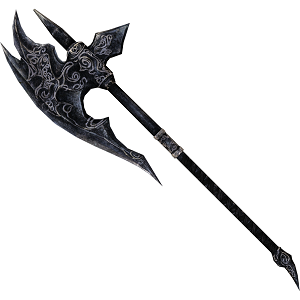 Description
A two-handed pole weapon consisting of an axe blade topped with a spike mounted on a long shaft. It a is made of an unknown black metal that, while well-worn, retained its edge after centuries in the gray.

History
The axe of the headsman of Moil was used for the slaying of (un)justly accused and sentenced criminals. Public slaying by the headsman was considered a great spectacle and the price of admission was high. A tireless mechanical creation carried out the executions and rarely missed a blow, unless it was directed to do so for dramatic purposes. The centuries without any human contact drove the creature insane, but its axe lost none of its potency.

The axe was recovered by Way-lynn following the executioner’s destruction.