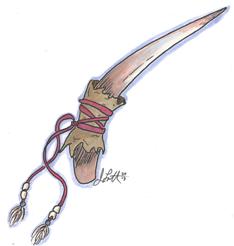 Description
Not much more than a large dagger, the First Sword of Tyr has a blade made of jhakar fang and is enchanted with magic that makes its blade bite deep.

History
This is one of nine swords crafted by the Veiled Alliance in an attempt to create a weapon capable of killing the sorcerer-kings. The Veiled Alliance was infiltrated by agents of Kalak and the swords were scattered to prevent them from falling into his hands.

The materials and craftsmanship suggest that it was not an artifact from Tyr’s distant past, but the powerful enchantments are unlike anything that this age has to offer.

How it came to be in the possession of Castri when he served the defiler Yarnath is unknown. The sword was recovered following the battle with Yarnath and given to the rogue Merric by his allies. Following Merric’s death it was recovered by Kelvor and united with the Third Sword of Tyr.

The sword was lost in the city of Moil when Kelvor was slain by the Tortured Vestige.

Jax recovered the sword while adventuring in Moil.