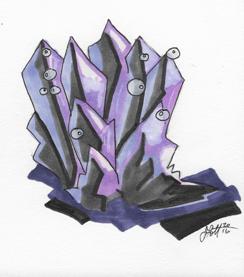 Description
This is a fist-sized, black, flame-shaped crystal that gives off a purplish light. Those who hold it hear whispers menacingly when grasped. These whispers offers power but warn of corruption.

History
The history of the Crystal of Ebon Flame is partially recorded in the Scrolls of the Sonlinor. This item is believed to have been created by Moradin near the end of the Dawn War as a means to preserve one of his fellow gods.

It is thought that the Primordials have cursed the Crystal in an attempt to prevent the return of the divine to Athas.

The Crystal was recovered from the caverns beneath Kemalok by Morg and his allies where it was carried by Elleandra.

The Crystal was stolen by Half-Giants in Altaruk, recovered from Tethrades and lost again in the turmoil following the attacks on Altaruk by Abalach-Re. Its current location is unknown.

The Crystal appears to have a divine power about which is capable of restoring life to those who have carried but not used it, as was the case with Elleandra.