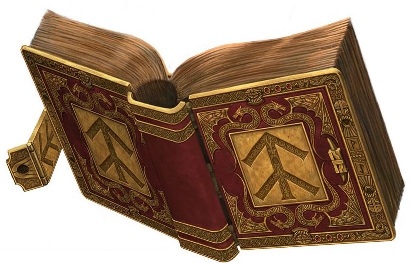 A book of dwarven history discovered in the ruins of Kemalok by Lyanius and later translated by Gwyn.

It was in the fifty-second year of Rkard’s reign that Borys of Ebe returned. Of our knights, only the king and Sa’ram and Jo’orsh remained, with five hundred dwarves to each. Borys of Ebe brought with him a host of ten thousand, with mighty siege engines and his own foul magic.

Kemalok was the last dwarven city, and with it would die the last of the dwarves. That, Rkard swore, would not happen. The great king ordered Sa’ram and Jo’orsh to flee through the ancient tunnels, taking half the citizens of Kemalok with them. The others stayed behind to conceal the passages when the city fell, to die so that Borys would not guess that others had escaped to carry on our stalwart race.

Not long after the knights left, Borys used his magic to drive twelve great holes into the city walls. It was at the last of these breaches that Rkard and Borys clashed in fierce combat. Before many strokes passed, Rkard felt the bit of his foe’s terrible sword, but our king’s sparkling axe also cleaved a mighty gash in Borys’ armor. The two commanders fell, each on their own side of the wall. Borys’ host carried their wicked leader back to his tent and summoned their healers. We loyal followers of Rkard returned with our king, the enemy’s balde still buried in his chest, to the Tower of Buryn. Then we sealed the gates and prepared for the final battle.

I do not know why the host left that day – perhaps Borys’ wound was too severe, perhaps Rajaat had summoned the Thirteenth Champion’s army, or perhaps it was another reason entirely – but Borys did not die on that field. I know this because he returned many years later, to accomplish alone and in less than an hour what his hosts had failed to do in ten days. He drained the life from all the city’s dwarves, leaving only ghosts to remember that Kemalok had been visited by the Dragon.

Version 2, found in the ruins of Mytilene….

Born of liquid fire and seasoned in bleak darkness, we dwarves are the sturdy people, the people of rock. It is in our bones that the mountains sink their roots. It is from our tears that the clear waters pour. It is out of our mouths that the cool winds blow. We were made to buttress the world, to support the cities of the green races, to carry the weight of the verdant fields upon our shoulders.

Much of the book is taken up with legends about the dwarves. Near the end are a few more relevant passages.

The day came when Jo’orsh and Sa’ram returned to Kemalok and saw what Borys had done to the city of their forebearers. Both dwarves swore to track down the butcher and destroy him. They set off for the mighty Citadel of Ebe with all their retainers and squires. When they reached his stronghold, however, they found it long abandoned, occupied now only by a handful of wraiths patiently awaiting the return of their master. These, Jo’orsh interrogated with the Way of the Unseen, learning that Borys had mysteriously lifted the siege of Kemalok just when it appeared it would succeed. He had sent his army back to the Citadel of Ebe and left for the Pristine Tower, the stronghold of Rajaat himself, to meet the other champions.

The names of these champions were recorded in the tome but time and the elements have ruined much of the information. It does appear that each of the fifteen champions was set to annihilate an entire race. Borys tried to destroy the dwarves. Two others are named: Albeorn, Slayer of Elves, and Gallard, Bane of Gnomes.

Jo’orsh and Sa’ram left the Citadel of Ebe and traveled with their retainers into the wild lands beyond the Great Lake of Salt until they sighted a spire of white rock in the distance. Here, all manner of horrid guardians appeared. They left their squires and retainers in a safe place, then continued to the white mountain alone. When the entered the Pristine Tower, they found that, like the Citadel of Ebe, it was abandoned, save for the shadow giants.

Here Sa’ram met the shadows, whom be bribed with obsidian. They told him that Rajaat and his champions had argued over the annihilation of the magical races, then fought a terrible battle against each other. By the time it had ended, Rajaat ruled the Pristine Tower no more. He was taken to the Steeple of Crystals and forced to use its arcane artifacts to make Borys into the Dragon.