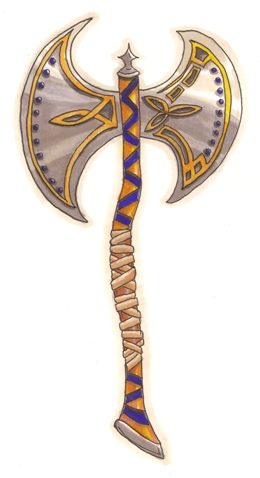 Description
The Axe of Rkard is a large steel greataxe that remains gleaming despite the numerous battles it has seen and its great age. The steel blades are inlaid with gold and the handle is wrapped in leather. The craftsmanship is clearly beyond anything possible in the modern age.

History
It is rumored to be one of five tools crafted by the first dwarves, the Axe appears in times of great crisis—often in the hands of a champion destined to save the dwarf people. The last known wielder was the dwarf king Rkard of Kemalok who defended his people against the might of Borys of Ebe and his genocidal campaign against the dwarves.

It was given to Morg to aid his defense of Kled against the army of Urik. Following Morg’s death in Gulg, Way-lynn used the axe. The sorcerer-king Nibenay is now in possession of the weapon after he killed Way-lynn.