Vinara is in her early twenties with brown hair and tanned skin. She wears armor made from the hide of a tembo underneath her travelling wraps. She wields a large wooden spear in combat. Her two companions, a large beetle named Bear and a spirit of the air, are never far from her.

Vinara was born under a blood moon, an auspicious symbol for her tribe from the desert expanse. At the age of her adulthood, she was chosen by the primal spirits to become a druid-guardian of her tribe and eagerly took to her sojourn to commune alone and learn from them. Her spiritual quest was successful and she gained the power to call upon her animal companion. However, while she was away a group of raiders hit her tribe’s camp leaving no survivors. The only tracks left behind resembled gigantic insect tracks, which were lost in the shifting sands. Over the next few months, she came to the Ringing Mountains to find a new tribe.

Vinara has had many adventures, in which she… 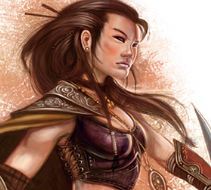