Merric is short for a Human and his time spent in the shadows and the Under-Tyr have left him with an unhealthy appearance. He is usually wrapped in cloaks and cloth to keep out the harsh rays of the sun. Concealed beneath his clothing is an arsenal of deadly weapons that are always ready in case of trouble.

Merric has always been comfortable in the dark and dirty places of Tyr. He was born there and quickly forced to survive the streets at a young age, eventually joining one of the many gangs of The Warrens.

Merric suffered greatly under the revolution in the city-state of Tyr. While he had no love for the templars of Kalak, he and his gang did have a certain understanding. With Kalak overthrown and no protection from the bribed templars, his former prey and competitors have all but eliminated his gang. With nothing left to loose, Merric has turned to the life of a mercenary, willing to help anyone for the right price.

Recently his skills were needed by the gladiator-adventurer Morg and he signed on as an expert burglar.

Merric has had many adventures, in which he… 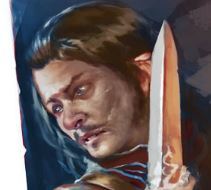