Lena is a tall woman with short cropped black hair, olive complexion, and a glare that could turn sand into glass. She is built like a lifelong soldier and wears her armor like a second skin, with the notable difference that where once there was an honored place for a city-state emblem, there is now a scoured to a rough finish.

Lena Denieth grew up, lived and breathed Urik. She joined the military as soon as she was able, and made officer in the cavalry corps by the age of 20. She believed in her city-state, and everything it stood for. Order, industriousness, love of city.

Patrolling the roads for bandits was good honest work, but one day she was called upon to help the slave catchers with a large and organized exodus.

This seemed easy. Helping retrieve the property of the city state is her patriotic duty. Once she got there, however, the context that the slaves had always been in had changed. Instead of seeing the docile workers going about their ordained duties, she saw dirty and downtrodden people running for their lives. She and her detachment had been ordered to run the slaves down and “thin the herd”, as there were too many to take back at one time.

Going to battle against bandits or soldiers from other city states was one thing, but what she was called upon to do was nothing but butchery.

She and her most loyal officers turned on the slave-catchers on her orders. The rank and file, either out of opportunism or nationalism, engaged in battle with Lena and her team.

After a few minutes of fighting, it was apparent that the small team of officers and slaves were outnumbered and outmatched. Lena ordered a withdrawal, with some of the officers acting as escort for the slaves that remained. She and the rest of the soldiers loyal to her remained behind to stall pursuit.

While making the retreat, a stray bolt brought down Lena’s mount. A large Mul slave-catcher spotted her and went in to catch what would be a great prize. At that moment, one of her lieutenants came round, lept from his crodlu, and grabbed hold of the slave-catcher around the neck, and bade Lena to run, that they needed her.

Not wanting him to die in vain, she mounted her lieutenant’s crodlu and left. Vowing to not rest until the barbarism she once upheld was dismantled down to the last stone.

Her and the remainder of her officers escorted the slaves until they found a slave tribe willing to take them in. Lena and her soldiers, with the help of any of the rescued people that were willing to learn to ride, went on to patrol the surrounding wastes looking for slaves to free and slavers to put to the sword.

The month of Scorch was aptly named, for Lena heard that the free city-state of Tyr had suffered a horrible calamity and that the population and city itself were all but destroyed. She didn’t have the details, but rumors from survivors were wild – a wasting sickness had decimated the population, a gray warrior and his shadowy companion slew the population, the Dragon had appeared demanding tribute and razed the city. Whatever the truth was people were scared and easy targets for slavers. She and her soldiers doubled their efforts to keep these refuges safe.

Lena’s life changed once again a month ago while hunting a caravan of House Tsalaxa that was transporting a number of slaves out of Urik. All went as planned, as it had done so many times in the past. The caravan was on schedule and the guards were numerous, but no more than expected. She and her allies followed the caravan west on the King’s Road towards the Black Waters and ultimately the city-state of Raam. A few days out, a normally safe distance from Urik, when the road made a sharp turn to the north, she decided to strike.

The caravan was camped on the edge of the Dragon’s Bowl, overlooking Lake Pit. As they descended on the caravan, she was surprised to see another group present with the Urik forces. They were strange in their appearance and unlike any group of raiders, adventurers or soldiers she had ever seen. As they appeared to be in the process of taking possession of the slaves, Lena knew that who they were was not important, only that they needed to be slain.

The House Tsalaxa forces were effective, but not a challenge for Lena and her battle-hardened troops. The strangers, however, were efficient and ruthless, with skill that was easily on par with that of the best of the Urik military. The battle was intense, but short as their steel armor was difficult to penetrate and their steel weapons were brutally effective. The strangers had a wizard among them as well as a master of the Way who were able to defeat a good number of her troops. Before Lena realized how badly they were outmatched it was too late. An explosion of lighting sent her and her crodlu tumbling to the dirt.

She never regained her senses as she felt her mind invaded by the mystic. Lena felt herself fall under the sway of the mystic and unable to resist his commands. Fortunately, she retreated into her own mind and was barely aware of her own actions. Fate, it appeared, had made her into another’s slave…

She has had many adventures in which she… 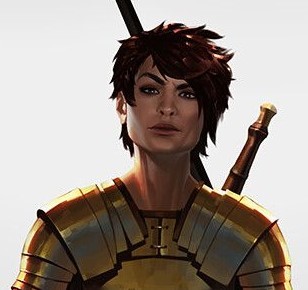