Kezmit is a human from Kalidnay who has always had close ties to the spirits of Athas. He is rough around the edges, appearing to be as comfortable anywhere in the wilderness as regular people are in their own homes. His scruffy outward appearance belies a keen mind and a giving heart. He wields a powerful totem in battle which allows him to convene with the spirits around him; whom he is almost never seen without. Spirits of wind, fire and earth spring to Kezmit’s aid in times of need and whisper veiled, yet helpful, suggestions to him, and his friends, when completing difficult tasks. Kezmit’s eyes burn with unbelievable conviction and the power it brings, if caught in the right light.

Kezmit has always heard voices. As a child it set him apart from others, an outcast in a land of outcasts. The Spirits of Athas whisper constantly in his mind; oblique instructions, obscure advice, cryptic messages, and outright enigmas, so many voices that it was impossible to determine how to appease them, or even what they want. With age brought clarity, if little, and it became obvious that Kezmit was very important to the spirits and thus took on a mantle of giving aid to those the spirits deemed worthy. This led him to the group determined to fight against Thakok-An, a resistance cell led by Laylon-Ka, similar to those found in the Veiled Alliance. The last solar cycle brought a change: a new voice. Clearer yet more distant, a voice powerful enough to quiet the restless spirits. This voice told him to seek out Li-Am, an underling of Kalid-Ma. Li-Am would be very important in the days to come. Change was coming on the wind to Kalidnay, and both Li-Am and Kezmit would have a role to play, or so the voices say.

Kezmit has had many adventures, in which he… 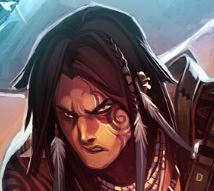