Jarvix, like most other Tieflings, has a pair of horns and reddish skin. His eyes are solid yellow and his teeth are pointed and sharp. He is usually wrapped in lightly colored robes and carries a simple wooden staff.

Jarvix was orphaned at a young age, but exhibited affinity towards the Way. His strong mental abilities caused him to manifest fits of rage and depression, making him anti-social and ultimately resulting in his enslavement. He was freed from slavery before the sorcerer-king Kalak fell and drifted for a time in the streets of Tyr until his telepathy helped him stumble into the mind of a passing old sage. The sage was a member of the Veiled Alliance, and with all his courage, Jarvix approached him. He demonstrated his talent and the old man recognized the potential service he could provide the Veiled Alliance. Since that time, he has used his telepathy to seek out new recruits for the Alliance and discovered Gwyn while doing so.

Jarvix has had many adventures in which he… 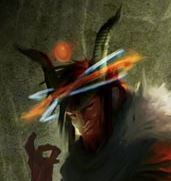