Iulius stands tall and proud, as is befitting of a captain in the Balic Legions. His armor is well used and well cared for and he carries the traditional spear and shield of the legions. His face bears a striking resemblance to his brother Dravus, and as youths the two were often mistaken for twins.

Born into a noble family in Balic, Iulius served his mandatory time in the Legions and found that he enjoyed the service to his city-state. He remained in the Legions so that he could better honor the traditions of his family and rose to the rank of captain. He is a competent and charismatic leader who has earned the respect and loyalty of his troops.

Until recently he bore the shame of this brother Dravus who deserted from the Balic navy and a hatred for Dravus burned for many years in his heart. Recently he learned that his brother fled from cruel tortures at the hands of a praetor of Andropinis and his world view was shattered. He abandoned his post to join up with the adventures that knew Dravus hoping that they would actually bring about a change for the better. 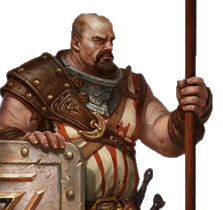