Iorskan is a tall, heavily muscled dray with reddish orange scales. He wears heavy chain mail armor made from red scales with golden highlights. In battle he wields a bone bastard sword and wooden shield.

Iorskan was exiled from his clan after refusing to join them in serving Yarnath. After his exile he spent time wandering near the city-state of Nibeany, primarily exploring the ruins of Giustenal. During those explorations he had several encounters with the Twilightchasers of the Sky Singers Tribe over potential artifacts.

The last thing he remembers was evading the Twilightchasers and coming across a circle of runes. He awoke to find himself bloodied and suspended from chains in the Shadow Tomb. Shortly after Elleandra and her allies arrived from the city of Moil and an uneasy alliance was struck.

Iorskan has completed many adventures in which he… 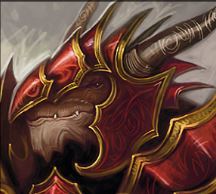