Gwyn stands out in a crowd, because of her tall elven features, wild hair and charismatic nature. She wears only light traveling wraps that are modified to allow for her dragon wings to emerge. She has several daggers hidden about her person. She is usually accompanied by a small dragonling familiar.

The daughter of Jalek, a moderately wealthy merchant in the Sky Singers tribe, Gwyn led a privileged but uneventful life. Her mother, Marisol, was gifted with the Way and staunchly opposed to arcane magic as was her older sister. Gwyn discovered that her father’s mother was a preserver and threatened to tell her mother if she did not receive training in the arcane arts, for which she had always felt a calling. Her father agreed – both angered and impressed with her bargaining.

She met a mysterious acquaintance of her father while in the city-state of Nibenay and he began to instruct Gwyn in the use of magic, making sure that she learned respect for the life that fuels her magic, something many never understand. Her mentor was killed before he could pass all of his learning onto Gwyn. Determined to find others who could teach her more about preserving magic, she left her tribe behind to forge a new life for herself.

Marisol recently suggested that Gwyn was not the daughter of Jalek, but rather the daughter of the Shadow King. Marisol disappeared shortly after Gwyn and her allies fought her atop the Ziggurat of Kalid-Ma and Gwyn was unable to get any more information.

Gwyn has had many adventures, in which she… 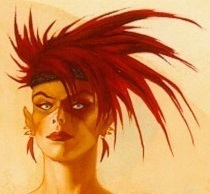