Midway between five and six feet, he doesn’t cut an imposing figure. Delen is slight of build and his skin has a bit of a pallid cast. The main reason for this is that the majority of his work for the Sorcerer-King Nibenay is as a low level functionary that catalogues and maintains the crypts under the city. Delen is not content with this life. His love of books and lore give him far more meaning than bureaucratic drudgery. His goal is to find out precisely how Athiss was blighted and how to use his magic to undo it.

He knows full well that accomplishing this task won’t be easy, so Delen is always looking for more knowledge and more power to help him save the only world he’s ever known.

Delen has had many adventures in which he… 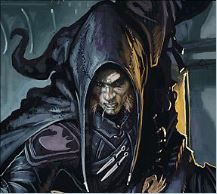