Castri has a very even mixture of elf and human characteristics, making it possible for him to pass himself off as a human. His true parentage is revealed only with careful observation. He has fallen on hard times since he was disowned and his once fine clothing has become worn and tattered. His bow and sword are never out of reach.

Castri is an illegitimate child of Adina Arynd in the city of Tyr and an Elf. He enjoyed the life of (relative) ease afforded to him as one of the nobles. Unlike many nobles he did not abuse his privileges and generally cared after his family’s slaves. As the youngest son he spent most of his time as he pleased, which usually involved hunting trips where he learned his skill with a bow, although he was forced to study the Way. Recently his true parentage was revealed and he was disowned by his father and siblings, despite his mothers protests. Since then he has made his way the best he can. Following the death of the sorcerer-king Kalak, many opportunities are developing, he is simply waiting for the right one to present itself.

Castri has had many adventures, in which he… 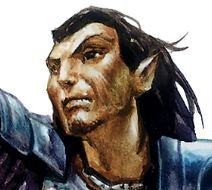