A New Journey
Following The Festival of the Soaring Sun, the group prepared to head out from the village of Kled to the find the ruins of Kalidnay. The weeks they had spent training the dwarves appeared to have been successful, and they felt confident that the new Tree of Life was in good hands.

The party realized the first of many difficulties with the two week journey – survival. The food, water and other supplies for such an extended journey we’re more than they could carry, and they didn’t know if there were any friendly places to really on the way. Jarvix provided the solution as he was able to create a floating disc using his powers with the Way which could support the weight.

The group traveled for three days through the stony barrens around Kled and then for a day along the road south. The party passed several small caravans but there was little to distract them during their travels.

House Shom
Along the road the party slowy overtook a large caravan of kanks and mekillots, bearing banners of three dragonflies on a red and black background – the symbol of House Shom. Having helped House Shom in the past, the party hailed them as the passed by. To their surprise, Dalem Shom emerged from the caravan. Gwyn and Kelvor were particularly surprised to see a member of the Shom family outside of a city-state. They struck up a brief conversation that was interrupted by another surprise – an elf emerged from inside the howdah who addressed Gwyn by name. Gwyn introduced the elf as Marisol, her mother.

The party learned that the caravan was headed to Fort Melidor, near the Lost Oasis, on a secret project devised by Dalem that would help restore the fortunes of House Shom. Marisol was working with Dalem to allow the Sky Singers tribe to get a cut of the profits. The party joined with the caravan as they were curious about the project, Gwyn and Marisol were eager to catch up, and the Lost Oasis was close to the rounds of Kalidnay. Vinara was the least eager to join with them, wanting to stay focused on their goal, but agreed nonetheless.

The next few days were mostly uneventful, with the regular House Shom employees taking care of the mundane tasks. Marisol and Gwyn spent most of the time talking. Although Marisol had a harsh view of arcane magic, Gwyn was able to reconcile most of their differences and a better understanding was reached between mother and daughter. Morg and Kelvor spent most of their time outside on guard duty, unsure about the nature of the cargo and what dangers it might attract. Vinara tended to the caravan’s animals, that were being pushed too hard by indifferent caravan handlers.

Jarvix spent the days pondering the nature of the cargo. One day he used his talents with the Way to gain access to the cargo. Although he only had moments, he was able to determine the caravan was hauling hundreds of metal cylinders – a precious cargo. He was not able to determine what the cylinders’ purpose. That night the party was approached by Marisol. She confided with them and revealed that she was not with the House Shom caravan as a member of the Sky Singer elf tribe, but rather as an agent of The Order. She asked Gwyn and her allies to help uncover Dalem’s true objectives and they agreed.

One afternoon the caravan was set upon by raiders from one of the many nameless bands. The caravan guards were aided by the party and repelled the dozen or so attackers. Only a few of the guards suffered critical injuries. Jarvix stayed out of the fight and looked into the caravan’s cargo again. He was able to determine that the cylinders were hollow and had screw-caps. However, their true purpose was still unknown.

Later that night, the group was attacked by a dozen or so abyssal plague zombies and a larger demon. The plague zombies were the remains of the raiders that attacked earlier and were quickly taken down by the party. The larger demon was more of a threat, but it was destroyed before the caravan guards could respond. Dalem was so impressed by them that he offered them employment with his House to guard the caravans. He revealed that his associates were altering Shaqat Beetles to carry a disease that inhibited a persons use of the Way. He planned to sell the weapon and use it against rivals or uncooperative customers. The party agreed to his terms when he mentioned the source of the disease was in the ruins of Kalidnay, which was their final destination. 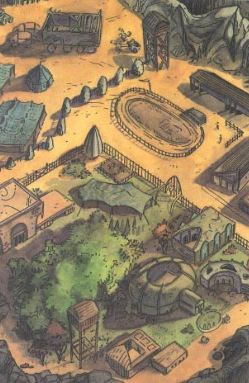 At last the caravan arrived at Fort Melidor, a sleepy outpost on the edge of the verdant belt north if the Lost Oasis. The fort was surrounded by earthen ramparts and a ditch filled with brambleweed. The caravan was let into a dusty square and everyone waited for Dalem to conduct business at the palatial manor inside a lush garden at the center of the compound. Once finished the caravan headed south for the last leg of their journey.

As the afternoon wore on, the caravan started passing ruined buildings and small fortifications, ancient fields and the defenses of the city. Skeletons of hundreds of people were visible, scattered along the weathered road. The skeletons could be seen slumped in their seats, suggesting that whatever happened to Kalidnay struck swiftly and without warning. The city itself was almost completely ruined, but the looming shape of a ziggurat in the center of the city could still be seen.

The caravan followed the main road to the center of the city and stopped outside the ziggurat. Dalem’s crew set about unloading the caravan while he, Marisol and the party entered the main floor of the ziggurat. The central chamber contained cages full of shaqat beetles along the walls and a strange apparatus on a central table. Several guards stood around the room and agents worked over the apparatus.

One of the agents approached Dalem and the two began discussing the logistics of the operation. As they talked the party got a good view of the process. The agents passed shaqat beetles into a glass box, operate the device and then transfer the beetles to a metal tube which is then sealed. The whole process appeared to take only minutes and the number of beetles in the room could easily fill the containers brought by the caravan.

The conversation between the agent and Dalem abruptly halted as the agent starred at Kelvor. A look of recognition could be seen on both their faces. The agent addressed Kelvor…

“Dravus, it has been a long time my friend. I was disgraced when you left us in Balic, but now that I have you and my project here, Andropinis will reward me greatly.”

Confusion spread quickly to everyone in the chamber. Dalem appeared panicked about the possibility that his plans were in jeopardy and kept asking the agent, who he addressed as Tethrades, to explain what was going on. Kelvor was shocked at the situation and was unable to answer his friends questions. Kelvor’s friends rejected the assertions that Tethrades would take Kelvor against his will, although they were confused as well. Only Marisol remained silent, observing the situation as it unfolded. The tension broke when the guards moved towards Kelvor and Morg charged to intercept them.