Shrine of Skulls
After awaking from the dream the party decided to take some additional time to recover from their adventures in the dreamland. Their rest was uneventful this time and they felt ready to face any challenge that they would encounter. Before leaving the room, Li-Am and Iorskan pocketed the silverware, knowing that the metal would be very valuable when they returned to Athas. Elleandra performed another augury, curious as to the nature of the dangers they might encounter. She learned that danger was all around her, but those closest were aligned in their goals. When they were finally ready, the group moved out into the only exit from the hall of tapestries with Kira and Li-Am in the lead.

The group passed down a hallway with several empty rooms off to the sides arriving at an apparent dead end. The large room contained many cracked onyx alters set around the crumbling chamber, each piled high with a cluster of blackened skulls. While searching the room for clues or possible exits, a pit trap was located and easily disarmed. At the bottom of the 20-foot deep pit was a passageway leading away from the room. Although the pit had some amount of the necrotic seepage present, most of the hardened adventurers were able to go through it without difficulty. While the rest of the group was working on the pit, Li-Am examined the piles of skulls and found a pair of enchanted bracers that he kept form himself.

Black Well
Moving through the cramped and twisting passage the group came to a chamber that had collapsed into a great chasm. A steady outpouring of black necrotic sludge flowed over the edge from great cracks in the walls. A greater torrent jetted out from faults in the rough rock of the chasm, falling as a hissing curtain of necrotic rain. In the dim light of their torches, rough ledges jutting out form the chasm’s walls could be barely made out. The bottom of the chasm appeared to be about 70 feet down, and partially filled with a pool created by the necrotic rain. Above the surface of the pool, a circular slab of white stone could be seen with for large dragon skulls, each a top a colored door.

Iorskan and Li-Am worked together to tie off a rope and lower Li-Am down onto the first ledge. The ledge gave way almost as soon as Li-Am’s weight was placed on it, crumbling down to the bottom of the chasm. They tried to lower Li-Am again on the next most accessible ledge, but that ledge also crumbled beneath Li-Am’s weight. None were willing to risk the climb down through the necrotic rain and Kira provided a solution – using her ritual magic, she summoned the spirits of giant eagles, as she had done in the past, to fly them down to the bottom of the chasm. 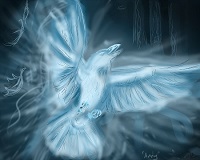 As the group descended the 70 feet, they began to notice that the necrotic rain had unnatural twists and patterns as it fell. As they circled down, tendrils of the black rain formed and lashed out at the adventurers. Kezmit, Li-Am and Kira failed to avoid the tendrils and suffered burns from the seepage. All managed to land at the bottom, with the eagle spirit patiently waiting with them. Kezmit noticed on his way down that there was an unusual echoing of the rain along one section of the wall and, hoping for the best, he directed the eagle through the curtain of of black rain.

At the bottom, Li-Am tried to open the yellow door just as Elleandra noticed the glyphs of warding around it. Too late an explosion of acid erupted from the door burning Li-Am and Kira. The door was revealed to be a fake, with no exit underneath it. Fearing the other doors were also trapped, the remounted their spirit eagles and headed to meet Kezmit who had called down saying that he had found a passageway.

Dead Tiles
The rough stone passage twisted and turned through black rock, wet the the necrotic seepage eventually opening into a ruined hall paved in 1-foot-square green tiles bearing arcane sigils and glyphs. At the far end of the hall a draconic skull could be see mounted to the wall. Cautious about further traps, Li-Am made his way down the hallway towards the skull and found no evidence of danger. The others followed him and to their relief there were no traps set off. Without much difficulty a secret door was located behind the draconic skull and it was forced opened.

Gifts From the Dead
Beyond the secret door was a wide hallway carved from black stone. The passageway had one branching path and lead to a small room that appeared to be a dead-end. After a bit of searching the party could find no signs of hidden doors or anything else unusual, so they backtracked and took the side passage which ended in a five-sided room. Carved stone pillars stood at each corner of the chamber and mystic runes wound around the walls. Weapons, clothing and armor could be seen atop a red stone dais at the center of the room.

Jarvix found his missing clothes and Iorskan noticed that his missing necklace of keys was atop the pile of gear and he went to retrieve it. Li-Am became very suspicious of Iorskan and threatened him. After a few moments of tension Elleandra reminded everyone of the her augury and their common goals. Li-Am backed down but there were some unresolved issues. Kezmit began to examine the equipment, attempting to determine their powers and who might benefit the most from them.

The room had a one exit, but instead of opening the doors, the party decided to backtrack to the fork in the passageway before the tiled hallway.

Sphere of Pain
The passageway lead to a spherical chamber with rune-covered walls and a unusual silvery sheen. The room was explored and another trap door was found on the far side. As they were disabling the trap, the silver sheen fell off the wall, covering the party. The silver substance began to eat away their flesh. Although everyone suffered painful blisters, Elleandra suffered the most.

The party took a few minutes to rest and tend to their wounds once the silver substance was neutralized. Then Li-Am dropped down into the pit followed by Kira and the others.

Planar Archways
The party followed a winding carved stone passageway with walls covered with mystic runes which came to an end with three stone archways. The archways appeared identical to those found in the entrance hall, save for the mists within were gray. Like those in the entrance hall, the mist obscured what lay beyond them. Elleandra and Gwyn could sense strong planar magic emanating form the arches.

After a brief debate, Kira decided to pass through one of the portals and vanished. Those left behind thought they detected a faint flash reminiscent of the Lands Within the Wind and decided to follow her. They found themselves facing a wooden doorway with luminescent gray moss growing between the stones of the walls. Flickering firelight was shining beyond the wooden door. They felt that they had left the Gray and returned to the Lands Within the Wind.