With the last rays of the setting sun, the Cerulean Orb and the Eye of Earth blazed to life and illuminated the entrance to the palace of Sielba. The party decided to leave the refugees in the gith cave as they were deteriorating quickly and would likely be of little use in the palace. Banoc feared that without additional intervention by Gwyn, the refugees would not last more than 2 days.

The party made their way through the palace finding little of interest, save for some loose coins and half-giant skeletons that appeared to be guarding long-forgotten chambers. Much to Phyll’s dismay, there was not sign of the druidic lore rumored to have been sequestered by Sielba. A secret door was discovered leading down to a lower level and Daqiq lead the way.

The lower level held the treasury of the sorcerer-queen and many more skeletons, who were alerted to the groups presence by a crack of thunder created by Jax. Banoc blasted the majority of the skeletons into dust and the rest were destroyed by a combination of Gwyn’s magic and Way-lynn’s weapons. Hundreds of metal coins of all types were found in the rooms and they all loaded up as much as they could carry. 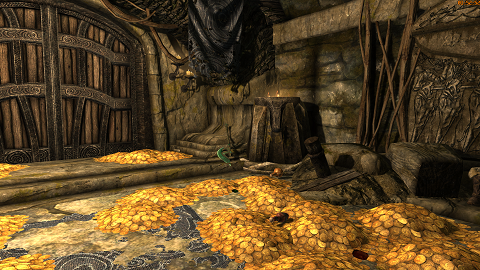 In a magnificent bedroom, which they assumed belonged to Sielba, another stairway leading down was uncovered. As hour was getting very late, they only briefly looked below before retreating to a safe room to try and rest before exploring further

You know, for an expert treasure hunter and thief, Daqiq is taking this sudden enrichment very well…

Ready to rock and roll