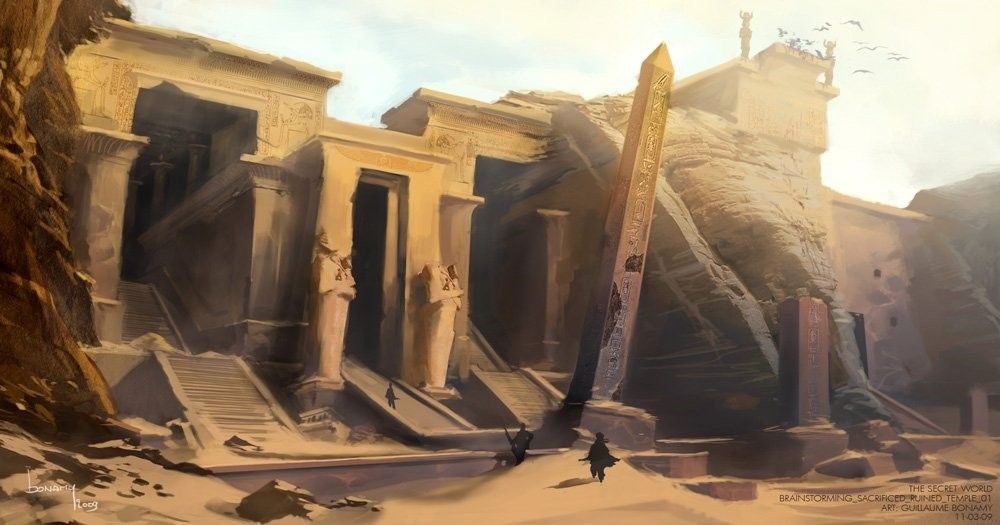 WIth the ruins of Yaramuke the adventurers have embarked on a quest to recover knowledge stolen by the sorcerer-queen Sielba from druids and preservers of old. They hope to use the knowledge to reverse a powerful curse on the nearby Black Waters Oasis and possibly to bring about a new Green Age of Athas. They race against the hours as their survival supplies are limited an the cursed refugees continue to wither, despite the efforts of Banoc and Gwynn.

At the Temple of Earth, the party wrestled with how to obtain the Earth’s Eye from the Dwarven Banshee guarding it. They had learned that in order to reveal the location of Sielba’s palace, they would need the Earth’s Eye and the Cerulean Orb in their proper places as sunset. However, the structures had been destroyed when Yaramuke was sacked by Hamanu, making it impossible for task to be completed. After all their attempts to reason with the creature had failed, Daqiq resorted to sleight of hand, but the Banshee was not deceived and attacked. The party was easily able to defeat the undead and gained possession of the Eye.

The following day, the group continued to explore the ruins, discovering a cave inhabited by silt runners. The weak reptilian humanoids were easily defeated by Banoc and Jax who took their supply of water for their own. Gwyn and Way-lynn were less successful in finding anything of interest, but were affected by some strange magic which hurled Way-lynn into the air and caused Gwyn to temporarily grow a third eye.

In the afternoon, the party unearthed the ruins of a museum containing many displays of art from the past. After exploring rooms filled with mirrors and statues, they removed rubble blocking a chamber containing many different orbs of all makes, shapes and colors. Using a dagger they found the templar barracks days earlier, they were able to deduce which of the orbs was the object of their quest.

Now in possession of both Earth’s Eye and the Cerulean Orb, the party only needs to discover how to use them to reveal the palace of the sorcerer-queen…