New Allies
After a few tense moments, the survivor and party started to talk. The group learned that the Urikite warrior, a woman named Lena, had been controlled by the Draxans for quite some time. Her memories were hazy and she was unable to recall a lot of information about her past, however she claimed to have deserted the army and taken up as a freedom fighter against slavers. Although wary, the party detected no deception and they accepted her.

The group headed towards the skull-shaped mountain and entered through the mouth. The passageway descended several hundred paces and runes consistent with dragon magic were seen along the walls. The chamber the found themselves in with likewise covered with runes and from six arches, six beams of light converged on an apparatus blazing with white light. Two shattered obsidian altars, each with a statue behind it, lay in ruins on either side of the apparatus. The floor of the chamber was decorated with a large skull and crown with six empty sockets.

The party started to explore and was somewhat caught off-guard when the statues animated and attacked. Although resistant to damage, the combined strength of the party was more than enough to overcome the statues and turn them into rubble. Way-lynn’s axe was very effective at carving up the statues, as was Jax’s blade.

The party spent some time exploring the room and trying to make sense of the situation. They discovered that the beams of energy were striking the apparatus, which appeared to be suspended over an air shaft, that they could not see. They had no luck in disrupting the beams and Lena was struck twice by the green beam causing her massive headache and dulling her wit considerably. They came to believe that each of the obsidian altars were connected to the Shadow Engine and Fey Engine that Gwyn had encountered. The device in the center of the room did not appear to be of similar construction was was likely not the Astral Engine.

Having no other ideas on how to deal with the machine, they party decided to follow the beams to their source and see what they could find there. Although they were operating in the dark with regards to the purpose of the beams and devices, they all agreed that if Dregoth was using them, they should be destroyed.

Chains of Binding
The followed the green and orange beams into a new region of the land. The expanse was filled with ruined tombs, tattered clothing and the ashes from offerings burned in tribute to unknown entities. The green beam originated from a tower on the edge of the land. On an island, many hundreds of feet beyond the main land, a pyramid with visible with the orange beam issuing from it.

The tower was closer and easier and it was not difficult to reach it. It was mostly in ruins with the green beam shining from a large hole in one side. The main door was blocked by rubble likely fallen from an upper floor that was no longer there. Daqiq scouted the tower and found it filled with rubble from collapsed floors, a green gem was visible floating in air. 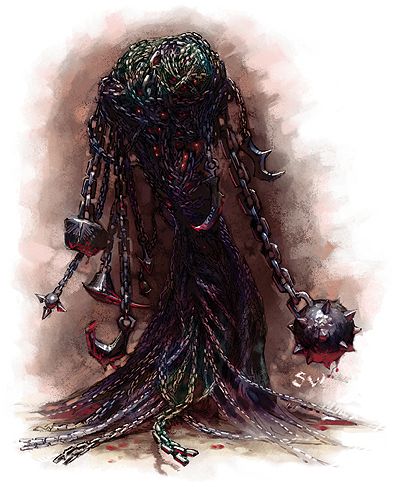 The rubble blocking the door was easily removed, allowing access to the ruined tower. The floor was covered in rubble and rusted metal. As the party approached the floating gem, the stench of sulfur and brimstone filled the air. A rattling of metal quickly became painful as a large mass of rusted and spiked chains animated around the gem and started lashing out at the party.

The group battled the chain which attacked both physically and conjured the worst fears into the minds of the party. The stalwart adventurers were able to shake fear and push the images out of their minds as they battled the chains. The chain demon was able to resist Gwyn’s fire magic and Lena’s simple weapons were unable to harm it until Thea used her magic to enhance it. Eventually the chains collapsed as the animating entity was driven off.

Banoc tried to grab the gem without touching the beam and although he was successful, his intellect was not able to overpower the gem and he only managed to burn his hand. Daqiq was eventually successful and pried the gem out of the air. When he did so, the beam stopped immediately. The party guessed that the six gems might be keyed to different attributes and that by taking possession of all six, they might be able to foil Dregoth’s plans.

Death of an Angel
The party took cover outside the tower and tended to their wounds before heading out to search for the other gems. They were awoken by horrible coughing and retching sounds coming from Thea. It appeared that she took a turn for the worse during their rest.

She was wrapped in her wings, but pools of sick, most with blood revealed that all was not well. She uncovered herself and many of her feathers fell off her wings to the ground. Her body was covered in sweat and her skin was red and peeling. More of her hair had fallen out and numerous blisters covered he exposed flesh. With tears of pain, she looks up at the group…

“Its okay. The device gave me more time that I was supposed to have and at least I was freed from that awful place.”

“I don’t know if Dregoth will be successful in his quest, but I know that countless innocents will suffer in his attempt and that he must be stopped. I’m afraid that I wont be able to help you any longer.”

“I hope that I was able to help enough to make up for my weakness and giving Dregoth the information he needed. I only wish that I had been able to stop Torakas from staying behind. He would have most helpful in dismantling Dregoth’s last engine.”

Thea stretched out her hands to Gwyn and Banoc…

“Keep the others on the right path. I don’t know who placed such a heavy burden on your shoulders, but I believe that you’ll be able to save your world by working together and realizing the good in yourselves and others.”

Her hands clenched tightly as another fit of coughing started. When it passed, she turns to Banoc.

“Its okay. Believe in the gods, they do exist. Take my tears, perhaps they will make a powerful weapon against your foes.”

Thea took Banoc’s vial of elemental water and held it to her eyes. Several of her tears mingled with the water, which started to glow. She handed the vial back to Banoc who took it reverently.

“Its okay. It doesn’t hurt that much anymore. And soon I hope I’ll be back with Lathander.”

With that her eyes became dull and lifeless and she slowly dissolved into nothingness, with not trace of her remaining.

Excited to see if we can killed in the; I mean have Lena test the beams.

My effectiveness is pretty limited at this point, so let’s be careful lol