The Hunted Lands
The party spent a bit of time trying to get information out of Rhys, but he had little to say and even less patience for the group, now that their money was spent. Daqiq asked about his experiments and, sighing as if talking to a child who doesn’t understand, explained what he was doing. None of what he said made sense to any of the party.

The group moved west, following the ravine and looking for a way to cross it. The lands before them appeared to be dotted with the ruins of courtyards and possible gardens. Numerous shattered stone tables and benches were arranged around what once might have been tranquil settings. Empty pools and shattered statues conjured images of long destroyed fountains. As they moved further west, the area slowly became covered with slime, fungus and other signs of rot.

With little notice the Daqiq found himself face-to-face with five humanoid creatures that appeared to be walking diseases. Their green bodies were covered with all types of sores, wounds and other signs of disease. They spoke in the language of dragons, and Gwyn translated for the group.

Who has drawn us to this land? Who smells so sweet? Who carries the sickness? We will not hurt her, we want to save her from death. She will live with us and we shall tell you a secret of this place?

Thea did not know these creatures but could tell they were demons and thus not to be trusted. Although the party wanted to know the secrets of this place, none were willing to sacrifice Thea to learn them. The creatures foul intentions were made more clear when they revealed they wanted to keep Thea alive forever and worship her and her sickness.

The plaguebearers would not take “no” for an answer and moved to try and take Thea when it became clear she would not go willingly. Banoc and Way-lynn moved to protect their ally and Daqiq and Gwyn attacked with bow and spell. Gwyn stayed back, too weak to aid in combat and used her magic to try and cleanse the rot of the demons. The foul beasts were surrounded by a horrible stench and biting flies, making it difficult to engage them in melee. To make matters worse they were exceptionally resistant to magic and Gwyn’s fire was useless. Eventually the constant attacks wore the creatures down and they were defeated.

They continued to explore the land and the ravine but found way to cross even the narrowest gap. The ravine floor was covered in a haze and appeared to be about 400 feet deep. There were no easy ways to make the descent as the party left all of their rope in Moil. Daqiq thought he spotted some movement in the haze, but couldn’t tell what made it nor did he see it again.

The Dead Gods Tomb
The party decided to take a rest to tend to their wounds and discuss the options.Thea’s conditioned worsened and she became feverish and dizzy and her nausea and skin conditions intensified. Daqiq and Gwyn familiarized themselves with their new items and Gwyn discovered that her staff was capable of being used to create a wall of force that would be large enough to span the ravine. The group also noticed that the northern lights were pulsing faster and faster as time progressed. None could guess as to what that meant. 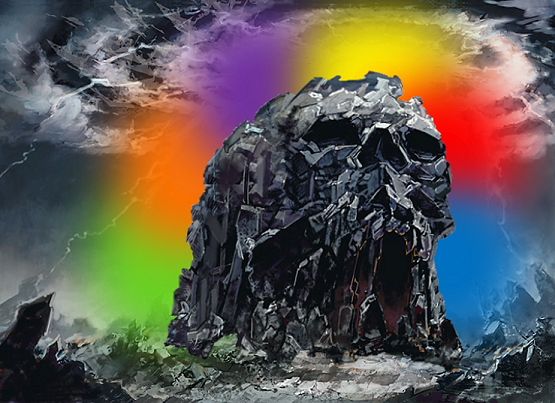 The ruined courtyards containing shattered fountains and benches became slightly less common, but as they moved through this area a large feature that appeared to be giant skull-shaped mountain became visible. The strange, multi-colored glow was coming from the far side of the mountain. As the party moved nearer to the mountain, they realized that what appeared to be the multi-colored glow was light from six different beams of energy coming from distant structures into the skull mountain.

Before moving closer, they decided to explore the lands a bit further to the west, in hopes of not missing something important and getting a better perspective on the skull-mountain.

The Draxans
The landscape gave way to ruing battlefields covered with the remnants of wars. Rusted armor and weapons are next to skeletons on the ground that is still red with spilled blood. Some of the fallen warriors appear to still be in a state of decay. The landscape had another large circular ravine similar in depth to the others and just as obscured by a dirty haze.

Daqiq spotted a group of a half-dozen humanoids, clearly of Athasian origin. Their clothing, weapons and armor were unusual, appearing to be of an old style, but clearly new and containing metal buckles. He could not place the city-state that they might have originated from. Although Daqiq was quiet and attempting to remain unseen, the other saw him and turned. In a strange dialect, of which he only understood half the words, they ordered him and the others to join them with the supplies they had requested. Clearly the group though that the adventurers were someone else.

Thea and Jax attempted to reason with the Athasians, and learned the they were servants of the Dragon and intended to make them their slaves. Gwyn attempted to intimidate them with her draconic form, and although they were confused, they called her an imposter that would submit like all the others.

Daqiq answered back by whispering words to him bow and firing an arrow at the templar, the arrow struck true and the templar fell to the ground. The other Athasians became enraged and charged in. As they moved closer, one of the Athasians stood out from the rest – she appeared to be moving stiffly and her clothing was that of the city-state of Urik.

A fierce battle ensued with the Athasians using spells, the Way and raw skill effectively. However, without their templar, the group was no match for the battle-hardened adventurers. After the initial barrage of flame and necrotic energy, Gwyn did her best to counter their magic and was mostly successful at nullifying their abilities. Way-lynn took many hard hits from a psionically enhanced warrior and an assassin, but was kept standing by the powers of water that Banoc commanded.

The last of their opponents was the Urikite, who, upon the death of the others appeared to come out of her trance and dropped her weapons… The adventurers surrounded her and contemplated their next move…