Hard Choices
In the biting sand and intense wind, a debate among the party raged on whether to go back to their ship to try and save the crew or follow the head’s advice and leave them to die. The party was split and arguments were made that swayed everyone back and forth. Way-Lynn in particular was conflicted while Daqiq was steadfast in his belief that there was nothing they could actually do for the crew.

Eventually everyone’s minds were made up and the party spit. Iulius and Lena could not leave the crew to the whims of Andropinis and headed west towards the landing point. The rest of the party followed Sacha and Wyan towards their vessel.

Although none said it, they all feared it would be the last time they saw each other….

The Shadow Viper
After a half-day march through the terrible weather, the party found themselves in a somewhat sheltered part of the island. There, partially covered by the sand and silt, was the vessel that the head spoke of. Gathering inside the hull, the party found two corpses that had been badly bludgeoned, by the giants according to Sacha. Gwyn recognized them as Tithian, the king of Tyr and Agis, a noble of House Asticles, both of whom were responsible for the death of Kalak.

Although they had been dead for months, some of their gear was still in excellent condition and the party recovered two magic rings, a sword and a pair of bracers. Within the ship itself were a pair of goggles fitted with purple crystal lenses. The party had no problem helping themselves to the items, as the former owners were clearly not needing them. Banoc briefly contemplated using his magic to try and return one to life, but that wouldn’t be feasible until the present situation was resolved. 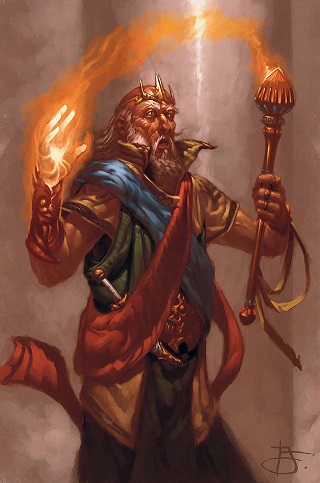 Dictator Andropinis
Lena and Iulius marched through the wind-blown sand, attempting not to choke on the silt. As they neared the shores, the weather abruptly calmed. They had spent enough time around Banoc to recognize when the weather was being controlled.

As they arrived at the shore, they saw a magnificent vessel out on the Silt Sea and the wreckage of the Sinful Kraken on the shore. A small army of half-giants and soldiers from Balic were on the beach, with the crew of the Sinful Kraken bound and on their knees before them. Andropinis stood in the middle of them.

Lena attempted a diplomatic approach and tried to bargain with information on Dregoth’s plans as well as invoking the name Rajaat. Andropinis appeared to be mostly confused by Lena’s “knowledge” and apparently knew much of it already. Lena’s guesses about Rajaat appeared to amuse the sorcerer-king more than intrigue him. However, hard Lena tried, she could not get the Dictator of Balic to release the crew and eventually grew frustrated and called him out.

The sorcerer-king obliged and engaged with Lena while his troops looked on. Lena’s lance was able to make contact with the monarch, but was unable to pierce his preternatural flesh. Drawing a flaming sword and conjuring a black shield of arcane and psionic energy, Andropinis continued to deflect Lena’s attacks are rained blow after blow onto her. As tough as she was, there was no contest and she was battered down in seconds.

The last thing she saw was Iulius being taken captive by the soldiers of Balic.

A New Plan
While huddling in the boat, which they learned was called the Shadow Viper, another debate began on how long to wait for Lena and what the next actions should be. Wyan told them that unless they obtained the Oracle, they would have no chance of defeating Borys and the sorcerer-kings. He proposed a simple solution of slaughtering all of the giants, but the party was not keen on that plan.

The eventually decided on moving the Shadow Viper closer to the crystal caves and having Jax assume the form of one of the dwarven banshees to try and draw out the giants. She could also use her magic to let the party infiltrate the caves and there, Gwyn would attempt to take control of the Oracle and they could then all escape. It was a bold plan, but the best they could come up with.

You misspelled the ship name again.

Return of the Dust Kraken