“See, I told you they wouldn’t be able to handle this!” Wyan said with a sneer. “They either were killed, captured or fled like scared crodlu.”

“It would appear that they did manage to defeat some of the simulacrum.” Sacha countered, nodding over towards the piles of sand in the large octagonal room. “I’m guessing they left for some reason, as all the door here are still closed.”

“Kalid’Ma’s forces probably just closed the doors behind them. Who knows where they are now! I don’t want to waste any more time on them.” Wyan sighed heavily, “We’ll have to start looking for others who will be able to help defeat Borys. Let get out of here before we get into trouble.”

Wyan and Sacha headed back to the elevator passageway leading back down and they floated down the passageway and out of the tower. 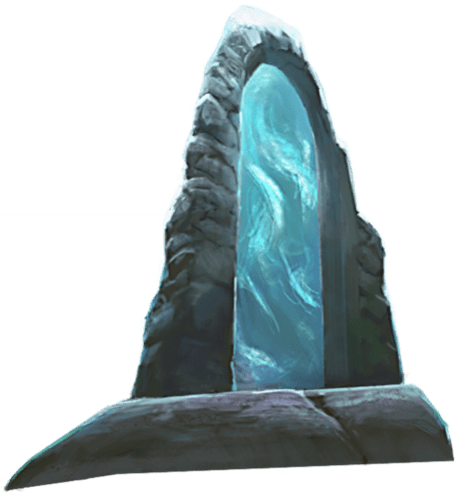 The room was quite for many long hours, then with a pop Gwyn and her allies teleported back into the tower, using the teleportation circle as a focus to avoid the mishap that had brought them to the stony barrens near the ruins of Yaramuke. They searched through the six doorways using Banoc’s magic or Way-Lynn’s strength to open them. Two doorways had warnings of evil and were not opened.

Each of the six rooms beyond appeared to contain portals to different locations. Although none were experts on planar travel, they deduced a few of the locations: Astral Sea, The Lands within the Wind, the Elemental Plane of Fire, and the Elemental Plane of Earth. Phyll greatly desired to journey to the forests of the Feywild, Daqiq was curious about the evils contained (and if they might actually be allies for the party). However, Jax and the rest felt that the Astral Sea should be the first portal they explored.