Two old friends silently moved down a corridor in the Under-Tyr. Their normally withered and parched skin looked almost healthy, and were they not literally two disembodied heads, they would have appeared almost jubilant. 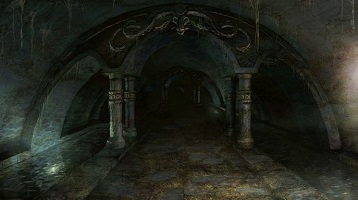 Licking its lips to recover a small spot of dried blood, the head with the top-knot speaks to his companion. “I bet they didn’t follow our advice Sacha. I’ll bet they just went into the false tower and didn’t follow the signs of their Veiled Alliance. How typical.”

“Well Wyan,” Sacha retorts, “you could have made it easier for them and just told them where to go.”

“They’ll need to clever if they are to defeat the sorcerer-kings and bring about their new Green Age. And besides,” he nods in the direction of an open door and floats closer, “they defeated Kalid-Ma’s simulacrum and didn’t die. They might be capable after all.”

“We’ll see.” Sacha snorts. “I wonder of Kalid-Ma has kept up all of old defenses or if he’s been so obsessed with revenge on Manu and Borys, that he hasn’t taken the time.”

Wyan floats around to the back side of the tower towards a concealed door, slowing as cautiously tests the threshold. “Well, he doesn’t appear to have strengthened them, at least not as far as I can tell. We should go in and see how things have changed.”

“You’re not thinking of going in to help them are you? I thought you’d decided to test their cleverness.”

“Oh, they are on their own, but should they succeed, I have a feeling we’ll have much to discuss.”

“Then hopefully we can drink the last of their blood before it get’s too cold.”