The Double Doors
The enormous set of double doors stood in front of the group as they took a few minutes to recover from their battle. The combat and the subsequent spell from Vinara to bring Merric back from the Gray had exhausted the party and their rest only helped a little.

Gwyn and Elleandra were quite sure that the doors were magically reinforced, making any attempt to physically open them futile. They found nothing but rubble and the remains of their foes in room after a thorough search. Merric braved getting close to the doors to examine the lock, fearful of being shocked as they saw the man depicted in the tapestry. His fears came true as he was hit by a blast of lightning from the doors. Although in pain, he finished his examination of the lock before backing away from the door.

Remembering the poem the group attempted to not follow their “common sense” in different attempts to open the door. Gwyn thought to throw a rock at the door, but was so badly hurt that she wanted someone else to throw it. None of these solutions caused the doors to open and Kelvor was badly injured in the process. Seeing no other option, the group decided to head back to the game room and search the outside for any clues or for the key itself.

Pool Chamber
Outside the main structure, there were many ruined mausoleums and other structures. The group split up and began searching for anything that might help them bypass the doors. An hour of searching revealed no signs of a key or anything else of interest in the graveyard. Only one other building was found to be mostly intact with small amounts of water issuing forth. The group ventured inside, wary of trouble.

The walls within the chamber were covered in the same peculiar runes. A stone-rimmed pool was burbling at one end, with water overflowing. The overflowing water ran down the side and trickled in various rivulets across the floor. Instead of randomly flowing through the rough floor, the water made twisting, snaky patterns that appeared to have the same eldritch designs. 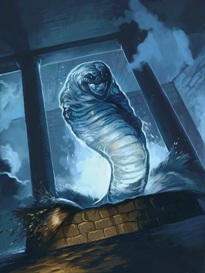 Vinara approached the pool, intending to take a drink (having quite enough of the riddles in this place), but she noticed a pale metal key laying at the base of the pool. It was slightly distorted by ripples in the water. Vinara was able to see past the surface distortions and grab the key. As she did the rippling in the water intensified and a strange watery serpent formed and lashed out at her. She deflected the attack with her spear. Morg rushed in slashing it with his axe and disrupting the serpent. A brief combat ensued with a constantly appearing water serpent. Each successful strike on the entity caused it to disappear. Only Morg was struck by the serpent and when he was, he disappeared from the room.

The party discovered that the water serpents range was limited and when Vinara left the building with the key, the serpent ceased its attack. About the time that the party returned to the main building, Morg rejoined them, drenched. He told the group that he had been transported to a fast moving river and was barely able to stop himself before plummeting over the edge to a 60 foot fall. The group re-entered the structure and quickly went to the double doors. Vinara walked up to the door and tried the key, only to find that it didn’t fit. She quickly backed away as the lightning from the doors blasted at the floor behind her feet.

There was no visible change in the room or in the tapestry, the sound obviously coming from some place else. They returned to find the double doors opened, revealing another hallway. They lit their torches and proceeded down a twisting passageway.

The Fey Engine
The chamber ahead of the group was clearly the heart of some sort of eldritch design. Runes such as those that had been seen elsewhere in the complex spiral along the walls and floor in various intertwining patterns, all finally culminating in the precise center of the room. An intricate contraption of iron rods and wooden shafts, crossing and crisscrossing each other stood at that point. At each intersection, a rune could be seen on wood and metal, and several of the larger joints were adorned with gemstones. At its top, the device came to a pyramidal peak, with prongs holding a gleaming emerald.

Although Gwyn and Vinara had no doubt that the device was the source of the draining energy they had all been feeling and experiencing, neither had any idea how the device functioned. It was magic far beyond their abilities. One thing was certain, the device, although powerful, was likely to be quite fragile. Kelvor stepped forward and swung a mighty blow with his scimitar.

A sudden flash of energy erupted from the emerald, nearly blinding the party with the intensity. The engine began to shatter and collapse in upon itself as the iron bars began to rust and gemstones turned to dust as they fell to the group. From an unimaginable distance, they heard what sounded like a shriek of frustrated rage, cut off in mid breath.

Admist the wreckage of the engine, Vinara located several precious gemstones that survived the destruction. In addition, one piece of the engine that was apparently obscured by the wood and iron survived. The piece appeared to be a staff made of twisted strands of smoky black glass, but it was obviously harder than the iron supports. Vinara gave the staff to Gwyn who felt strengthened by the shadowy energy the staff infused her with.

Morg took all of the iron bars that appeared to be mostly intact from the wreckage and the group headed back out of the complex. As they did so, they noted that the structure appeared to be decaying rapidly – the remaining tapestries were fading, the game room was in disarray with the boards and pieces broken and lying on the ground.

A Well-Deserved Rest
The group made camp near the pool and enjoyed an uneventful evening with Morg and Kelvor on watch. The following morning they met Paelias along the trail and exchanged news of their adventures. Paelias confirmed that the destruction of the engine had halted the destruction of the land and appeared to be returning the creatures to their normal temperaments. He invited all of the group to join him in the nearby village of Dempsy before returning them to Athas.

At the village they restocked their supplies of food and water and were able to take some time to pursue some individual activities. Although not all had much that was acceptable currency in Dempsy, they were able to secure enough provisions to make the passage to Kled. Kelvor asked Paelias if he had any advice or knowledge regarding the crown. Unfortunately, the only assistance that Paelias could provide was generalities about the difficulty in destroying powerful magic artifacts. Morg and Merric spent some actual gold coins on buying a metal weapons.

Gwyn and Vinara tended to the recovery of Elleandra, who was still under the effects of the Crone Statue. Paelias provided Gwyn with instruction on a power ritual that could remove her affliction. With Vinara’s assistance, Gwyn was able to complete the ritual and restored Elleandra to her original health, although it took her a bit of time to recover fully from the ordeal. Gwyn’s companions had not realized how powerful she was becoming in her magic studies and were impressed.

The Village of Kled
Eventually the group decided that it was time for them leave the Lands Within the Wind and to return to Athas so they could continue their quest to free the dwarves of Kled. Elleandra decided to join them, feeling that the connection she felt to Vinara, the spear and the seed was no mere coincidence. Paelias, with the assistance of Gwyn and Elleandra was able to send them back to Athas much closer to Kled then they had origianlly thought.

They found themselves on a large hill overlooking the village of Kled. None had been to it before and were shocked to see that the squat buildings had no roofs and that the entire town was arranged in a series of concentric circles. Clearly visible, even from the hill, were the banners of Urik – a golden lion walking like a man on a red background. Also visible were green banners with a red emblem of a two-headed snake. Kelvor recognized those as the crest of House Lubar.