Journey to Kled
After recovering from their ordeal in Slither, the group headed away from the wreckage, careful to avoid any remnants of Yarnath’s forces. The terrain they took was very treacherous, but the group was accustomed to such difficulties and had little trouble. Gwyn and Kelvor were able to locate water but discovered too late that it was unfit for drinking. Morg’s endurance and Vinara’s skill at avoiding the natural predators allowed them to press on without further difficulty.

During the first night on their journey to resupply at the Silver Spring Oasis the party was awoken to sounds of a struggle and found Merric and Chai-Tak facing off against each other. If that wasn’t bad enough, Kelvor was missing with no signs indicating where he went. The rest of the group was paralyzed with indecision and did nothing until Merric lunged at Chai-Tak who fired his bow. The arrow went wild and Merric struck true with his sword. Gwyn and Morg stepped in to end the scuffle. Chai-Tak accused Merric of attempting to steal the Seed and Merric accused Chai-Tak of attempting to poison him.

The two were separated and Vinara took the Seed herself. The group waited several hours for Kelvor who suddenly appeared, unnoticed by the others. He claimed to have been transported to the Lands Within the Wind where he traveled through a forest, across a river and battle a nightmare creature with a beautiful woman and a noble elf. Dismissing his tale as a dream brought on by the tainted water, the group finally resumed their journey to the Oasis.

Another day of hot and dusty travel brought them out of the wastes and to the gates of the Silver Spring Oasis. It had only been a week since they left it felt like it had been much longer. At the gate the hailed the guards and asked for entrance. After a long pause the guard dismissed them, saying they were not welcome at the Oasis. After a few arguments two things became clear: they were not going to be allowed entrance into the compound and that their actions with their House Tsalaxa captive had come back to haunt them.

Ashamed and dangerously low on supplies, they continued on the road towards Tyr.

Fey Crossing
The first night away from the Oasis the party fell asleep, despite their intention to keep a watch. They all awoke with a sudden feeling that they were falling. The feeling lasted only a moment and then they found themselves standing on a narrow trail running through thick grass. The air was heavy with the scent of greenery and there were large trees looming over the group. Vines and heavy foliage was strung between them and the air was cool and damp. Everything seemed abnormally clear: Colors were brighter, sounds were sharper, and objects – for lack of any better way of thinking about it – were more real.

The consensus was that they were within the Land Within the Wind, but how they got there was unknown to any of them. Kelvor was relieved that he was not going mad; that it appeared far more likely that his dream had been real. Gwyn was overwhelmed with the raw magic of the place.

As they were still getting adjusted to their new surroundings, they noticed two figures walking down the road towards them. The group prepared for trouble, but Kelvor recognized them as the individuals he had previously met here – Paelias and Elleandra. When the two were close, Paelias greeted Kelvor and told him of the continued growing evil in these lands. He had hoped that the malignant power was isolated to the dream portal, but it now appeared to only be a symptom of a larger issue. He and Elleandra had tracked down a possible source of the corruption to an ancient site known as the Garden of Graves.

Paelias explained that he believed that if the corruption of this realm were not stopped it might have drastic consequences for Athas. The group, especially Morg, was less than enthusiastic about dealing with another set of problems. Somewhat taken aback, Paelias offered Morg a small purse filled with coins as a reward for his assistance. Morg, and the othera accepted. Paelias was needed elsewhere and did not accompany them, but the group was joined by Elleandra who knew the way to the Garden.

Woodland Woes
With Elleandra guiding them, the party made good time towards the Garden. After several hours the trail they were following came upon a clearing with a crystal clear pond of water. Around the pond was a small group of humans a couple men and a woman and two small children. With them was a large white beast with a single horn and some type of hairy tail – nothing the adventurers had every heard of before. Although suspicious, there was no immediate danger so the group approached the pond and was greeted warmly by the woman.

The woman told her tale of woe: her group were refugees from a nearby village that had been attacked by creatures she called goblins. Although the descriptions were strange to everyone be Elleandra, the scenario was all too familiar – a marauding band of raiders. As the conversation was made and the cool water was had by all, Merric began to become uneasy with the situation, sensing something wasn’t right. Gwyn detected some type of magic at work, but it was Elleandra (who was far more familiar with this world) who was able to break the illusion. 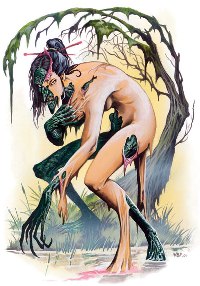 The two children shrank and turned into small furry creatures with antlers on their heads. The two men grew into monstrous green brutes with clubs and leathery skin. The animal remained much the same, but the pure white coloration turned to dark ebony and the horn turned a sinister red. The woman became wrinkled and purplish in color with with wild hair and tattered clothes. Without another word, the transformed creatures rushed to attack.

The unusual nature of the creatures proved to be quite a challenge to the group during the combat. When the creatures were thought to be killed, the reanimated and continued to attack for a brief period of time. This was likely another side effect of the corruption in the area. The brutes took a liking to Gwyn and knocked her out twice during the combat. They appeared to possess an ability to regenerate naturally and only Kelvor’s torch put them down for good. The small furred creatures proved exceptionally difficult to defeat and they had vicious teeth that tore into Kelvor’s neck. The horned creature’s mere presence aided its allies and it healed the woman when she was near death.

Although the group didn’t work together exceptionally well, they were able to defeat the strange creatures. Elleandra’s magic was able to distract and incapacitate many of the foes. Gwyn’s magic was a combination of misdirection with her Veiled Alliance training and powerful sorcery. Vinara was able to keep the party alive and she and bear focued on the woman and the horned animal. Kelvor moved all over the fight attempting to keep control. Morg engaged the woman and attempted to keep the small animals in check. In the end they all collapsed near the pond, in much need of a rest.