The Tower of Health
Daqiq watched the woman for a few moments as the rest of his friends quietly moved up to his position. From what they could tell, the woman did not appear to be one of the undead creatures of the city. Daqiq quietly cleared his throat and she looked up with anger that quickly turned to surprise and then a multitude of other emotions flashed across her face. She begged for them to enter the room, stating that the city was dangerous for the living and that they would be safer in her room. Although they were skeptical, they sensed nothing of genuine concern and entered.

Way-lynn was the last to enter, carrying the body of Torakas. At the sight of the dead dray, the woman gasped and started to panic. She asked that he be laid down so that she could tend to him, and mentioned that the city was not a good place to die in. Daqiq initially refused, holding her back, but with each passing moment she became more emotional and tears fell from her eyes. Again sensing no ill will, they released her and she rushed to the side of Torakas and placed a hand on his chest. A moment later he coughed up blood and began to breathe again.

The majority of the party was shocked by her miraculous touch, but Way-lynn drew The Blade Perilous and charged Torakas. Banoc moved to intercept and tried to use his elemental powers to break the sword’s hold over the half-giant, but the bond was too strong. Jax used her charms to convince Way-lynn to let Banoc break the curse on the sword, and Way-lynn agreed, standing down once free of the weapon’s influence. The woman was shocked, appearing incapable of believing that someone would want to harm the living.

The tension of the situation lasted for a time, but ultimately calm emotions prevailed and everyone began to discuss recent events. The woman, who introduced herself as Thea, was unable to recall anything beyond this room and was discovered to have two large vertical wounds on her back that Banoc was unable to heal. She claimed to be trapped in the room and a careful inspection revealed the room was indeed a prison formed by runes of dragon magic inscribed in the walls.

Torakas claimed to be the chief artificer of Dregoth and responsible for most of the modifications and additions to the city of Moil at the request of Dregoth. Although he spoke of the sorcerer-king of Giustenal reverently, he appeared willing to aid the party, but demanded the Blade Perilous in return, for he did not trust anyone else to wield it. At the end, it was decided that Thea would hold the blade, for everyone agreed that she was the most trustworthy, and she expressed no interest in wielding it. Torakas set to work dismantling the prison with the assistance of Gwyn and Banoc. Daqiq scouted the rest of the tower and reported several interesting finds.

The ground floor of the tower was a mess of debris and crumbling walls. Throughout this level there was little to take notice of. At the end of one long passageway there was a single intact door that was ajar. The room beyond held shelves along every wall and stood in two high rows down the center of the chamber. The shelves were filled with all manner of containers, but the frost gave every vial, bottle, packet and pouch the same ominous, crusted while pallor. Here and there, some past disturbance had toppled bottles and vials to the ground as evidenced by debris on the floor of the chamber. In the southern corner of the room, an entire shelf unit had toppled forward. The former contents lie in a heaped pile of glass, ceramic, cloth and bone beneath the shelf unit.

Given the potential dangers, the group rested in Thea’s room to tend to their injuries and recover their strength. Each could feel the pull of the Gray weakening them further, but Torakas and Thea appeared to be resistant to this effect. Torakas spent the time searching the shelves and selected a large number for himself, promising to share, but arrogantly assumed the party would not understand what they were.

In the middle level of the tower, the group discovered a room containing a bulbous-looking metal container. It was about 5 feet in diameter where it rested against the floor and expanded to a 10-foot diameter near the ceiling, 12 feet above. Small glass pods protruded from the surface, and most of the glass pods shone with pinpoints of green light, but some were shattered and dark. On the facing side of this apparatus, there was a deep indentation visible, shaped like a humanoid body. The once comfortable-looking leather padding within the cavity was now cracked and peeling.

There was a single zombie patrolling the room and it was easily dispatched by Daqiq. Torakas examined the device and declared that it was used for curing injuries although he could not guarantee how effective it would be given the damage. To test it they decided to put the zombie into the device. It whirred to life, repairing it’s most recent injuries, but nothing else happened. The party tried to convince Thea to try the machine out, but she declined.

The Tower of Salt
Having fully explored the Tower of Health the group decided to move on. Torakas took great pride in explaining the name and purpose of the major towers in Moil, and his contributions to each. One nearby tower he described as the Tower of Salt, for the basement was flooded with icy cold saltwater. This description closely matched Banoc’s vision of where the key to escaping the city might be and the entire party decided to head there and investigate.

Along the way they encountered a group of wraiths and were easily able to dispatch them. Thea wielded the sword with far more skill than expected and her attacks were filled with a radiant energy that obliterated the spectral foes. This convinced everyone that there was much more to this woman than was first apparent.

The bridge ended at a dark opening within the side of a tower constructed of steel. No symbols or glyphs marked the entrance to this tower, and an unmistakably briny odor emanated from the dark portal. There was no bridge or support beyond the tower portal, just a black chasm of the tower interior. The noise of what sounded like waves lapping against a shoreline echoed up from the darkness below with a relaxed rhythm. The sharp odor of salt hung heavy in the air, its source not immediately apparent. Immediately to the right of the portal was an iron ladder bolted to the interior of the tower. The ladder, pitted and rusted in spots, lead down into the blackness below.

The cold, murky depths seemed to pull the heat from everyone’s bodies and the light from their eyes. The party saw what appeared to be a wide cave mouth in the rough salt crystal wall. A closer looked revealed a narrow passageway leading under the water. Torakas worked his magic and produced tokens for each of the party members that allowed them to breathe underwater.

Daqiq lead the group through the freezing water and after several hours they emerged into a grotto formed from discolored salt. Daqiq was exhausted and barely able to move. Torakas produced a vial that he had found in the Tower of Health and with one sip, Daqiq was invigorated and able to carry on. On the far north wall was a perfectly circular hole with bits of rusted metal attached to the stone walls of the cave, an odd sight that none in the party could make sense of. 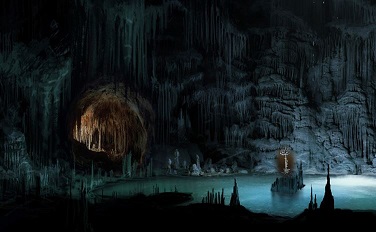 Following a twisting passage, the party found a very large cavern. Unlike the barren, salt-enclosed expanses encountered up to this point, this room contained something of interest – a large mound of glinting coins, gems, sculptures and other finery on a small island in the middle of a frosty lake. Rising from the center of the pile was pillar of salt, atop of which was a large key. This was the location of Banoc’s vision and the key was the key to their escape.

The party, ever cautious, checked the room and although they could not see anything Banoc’s magic revealed two interesting facts. First, there was an aberration beneath the water – a creature not of the normal world. Secondly, Thea was a celestial – a creature from the outer planes. No more information was gained on either discovery, and the mystery of Thea remained.

As the party stepped into the cavern, each received a telepathic message. The voice that spoke to them felt like a thousand needles in their minds and attempted to convince them to leave without disturbing the key. Each message was unique and played to their individual fears and desires. However, the party was unconvinced to heed the message, as they so strongly wished to leave Moil. Jax used her magic to try and grab the key from the island but before she could the water erupted and a gigantic creature with numerous eyes and tentacles burst forth from the water. It was likely they would have to defeat the guardian before they could safely obtain the key.