The Tower of Discipline
Although the companions were eager to get moving, Banoc was in no shape for travel. The injuries he sustained during the fight with Krampus had nearly cost him his life. Reluctantly, the group retreated into the relative safety of the tower and tended to his wounds. During there rest, they saw the passing of several groups of undead, but none approached their position.

When they were ready to head out, they noticed that Delen was no longer with the group. Those who were on watch did not recall seeing him leave. Although they were concerned about his departure – for many different reasons – they could find no trace of him and so decided to head out towards the southwest most tower. They trusted that he would catch up with him at some point, and most suspected he was more than capable of surviving in Moil.

As they were leaving the tower and heading out onto one of the lower bridges, Daqiq spotted a group of banshees approaching their position. They retreated into the tower and attempted to hide, but the banshee’s ability to track the living proved potent. Banoc jumped forward and, presented his holy vial of water, channeled elemental energy to force the spirits back and all but one of them fled. With Way-lynn’s new weapons and Gwyn and Banoc’s magic, the banshees were defeated one at a time as they continued to flee across the bridges.

Forsaken Tower
The banshees moved to the east, away from the party’s intended destination, but by the time the banshees were defeated they were almost to another tower. They decided to investigate, guessing they would not come back this way again.

The tower at the end of the the bridge was windowless and featureless and, unlike many of the other towers, the entrance was blocked by a door of rough granite. Above the entryway was a carving of the head of horned animal, beneath which was an inscription that read “Ware the weaver in her lair”. There was a brief discussion, but the consensus was to explore the tower.

Way-lynn opened the heavy door revealing a long passageway filled with webs of inky blackness. The strands were clearly magical in origin, but none knew what could have created them. Jax and Banoc used their magic to create magical light that appeared to burn away the strands and the party slowly entered to tower. They found many dead ends and passageways bricked off creating a maze. Had it not been for their light, they would have certainly become hopelessly lost.

At some of the dead ends, there were bodies that were broken and hideously emaciated. Banoc and Daqiq found that each had a single large puncture wound and that their interior organs and fluids had been drawn out in some terrible bloodletting. Everyone in the party was uneasy about the prospect of facing a creature that could do it and Banoc almost convinced them to leave, but they persisted and chose to head to the upper level of the tower.

The webs of darkness thickened and it became more difficult to move against the darkness. They began to hear a sound like dry leaves scraping on a stony surface and they knew something was stirring in the heart of darkness. They began to hear whispering and all tried to prepare for what they felt was an inevitable attack. The inky darkness made preparation quite difficult and it was too late when they saw a many-legged creature apparently made or or plated in metal emerge from the darkness. 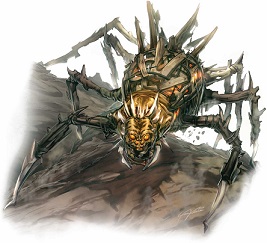 The creature attack with beams of darkness and stabs with its front legs. Way-lynn, Jax and Banoc took the majority of the attacks, with Banoc becoming paralyzed for most of the combat. The creature itself appeared to be immune to most of the party’s attacks, with Gwyn’s fire and Jax’s sonic attacks proving to be the most damaging. Way-lynn hacked with their weapons, cutting off portions of the legs until landing a mighty blow that severed the creatures head.

While Jax tended to Banoc’s wounds, Daqiq searched the chamber finding a significant amount of treasure among the numerous corpses. He also found a belt that was in remarkably condition and suspected that it might be enchanted. Without Delen, they could not identify any powers that it might have. The rest of the tower was empty except for the ever-present strands of shadow and the party moved back outside and headed to the southwest most tower.

The Tower of Health
They encountered nothing but cold and ice on the way to the tower. Above the arched entrance to this tower a single image was inscribed upon the stone: a humanoid figure wrapped in many lengths of cloth, about which two dragons were intertwined. About the head of the wrapped figure, the serpents stared at each other eye to eye. They entered the lower level of the tower, and found mostly empty rooms with the remains of beds. They suspected that the tower was a place for the sick or injured.

In the lower level of the tower Daqiq found a single room that was illuminated. He approached carefully, scanning the room while trying to remain hidden. He saw a bed crumpled against the far wall and a wooden armoire smashed almost beyond recognizability. What was once probably a mirror had been reduced to reflective splinters. Squatting in the middle of all this destruction was what looked to be a youthful woman wearing a gray robe with a long white coat over it. Her skin was grayish white and her hair platinum blonde. She supported her head in her hands, as if she were suffering or sobbing.