The Tower Of Discipline
The party decided to finishing exploring the Tower of Discipline before continuing on to other towers in the of the city. They had little to go on, except for Banoc’s vision of key in the southwest portion of the city. They left the torture room and moved up to the middle level of the tower. Delen’s undead servants carried the body of the slain dray, Torakas.

The middle level of the tower contained mostly empty rooms that had decayed over time. Nothing of interest was discovered and the party was about to move on, when they stumbled upon a pie-shaped room that was decorated with Headsman’s axes. A jumble of broken and smashed wooden chairs and other cluttered debris filled most of the room. As they surveyed the room, they saw a stone dais upon which was set a large block of stone that showed many nick and cuts. Standing menacingly behind the stone block was a humanoid figure wearing a sack like black hood and wielding a nasty-looking headsman’s axe in gauntleted hands.

While everyone else kept their distance, Daqiq moved around behind the figure and attempted to grab the axe from the figure. As he did so, the armor animated and they began to struggle. Although the construct was powerful, it was no match for the group and eventually collapsed into a pile of armor scraps. Its axe was claimed by Way-lynn and determined to be powerfully enchanted when Delen examined it.

The group decided to rest in the secluded chamber, tending to their wounds and hopeful that they would not be disturbed by the denizens of Moil. The hours past with only a single interruption – a group of Moilian zombies approached but when they came within sight of the party, they stopped, bowed respectfully and departed. None in the party knew what to make of it, but were pleased and their good fortune.

While the rested, they could hear a storm beginning to rage outside and eventually heard scraping and clawing sounds on the outside of the tower. The sounds were not like those of the Vestige and the party moved to the roof to investigate further.

Krampusnacht
On the roof, there was a swirling storm of ice and snow a lone figure stood in the middle, attending to some business of its own. The figure was large and cloaked, with chains wrapped around it. Horns protruded from its forehead and cloven feet could be seen on the ends of strong legs. At the group’s arrival, the being turned its attention to them. 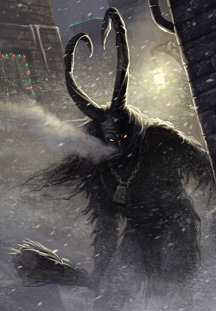 Gwyn met the creatures gaze and fell under its power – she was compelled, for some basic reason she did not understand, to do no harm to the being. The creature shouted at Delen, “you’ve been a very naughty boy!” and attempt to use some type of magic against him, but Delen resisted. Jax and Way-lynn moved in, avoiding an icy blast that destroyed most of Delen’s undead allies. Daqiq stayed at ranged and fired arrow after arrow into it, but the creature was barely slowed.

Banoc too moved in and engaged the beast in melee while attempting to keep the others alive and fighting. Delen eventually failed to resist the creatures magic and found himself trapped within a magically constructed cage of rusted steel. Gwyn finally escaped the compulsion and launched a fireball at their foe, burning him badly as it was unable to resist her draconic fire. Delen freed himself, only to be trapped again within the cage, but managed to use some of his magic to weakened the horned fiend. Banoc fell under the onslaught of attacks, but Jax seized the opportunity and landed a blow with her psychic blades.

With a howl of rage, the creature collapsed into a pile of ash, only a large bag and the chains remained. WIth the creatures defeat, the storm subsided quickly. Banoc was stabilized and his wounds tended to. Delen examined the chains and bag, finding them both magical. Way-lynn recovered the axe, which the beast had stolen from them during the fight.

Battered but alive, the group contemplated where they would go next…