The Weak Tower
Many hours passed without interruption, enough that the party was as rested as they could be given the increasing cold and dread they felt. It was clear that their life was being drained away with each passing hour they spent in Moil. None knew what would happen if they stayed too long, but all assumed that it wouldn’t be good.

Banoc shared that while they rested, he had a vision from his elemental patron. In this vision he was drawn to a tower in the southwestern portion of the city where he saw a key that he believed to be a key to exiting the city. Having no other incentive to travel to any other portion of the city, the group decided to follow his lead and sought out the tower from his vision.

The Tower of Test
The thin trestle connected to the side of a nearby tower leading to an open archway which beckoned with its quiet darkness. Above the archway, the unmistakable symbols of martial implements have been inscribed into the metallic surface; a sword, an axe, a gauntleted fist and a cocked crossbow.

They moved through the archway into the middle of the tower and after some exploration they discovered a room with the exterior wall of the chamber missing. The held dozens of 2-foot-diameter colored glass spheres strung from the ceiling on corroded copper chains. A barely audible hum filled the area and no other exits from the room could be seen.

Daqiq was the first to enter the room and others followed, with only Banoc staying outside the room. A series of musical tomes started to play when the room was entered, rising to a chaotic din. The orbs shimmered in time with the storm of sound and their ears started to pound as their stomach’s churned. Each tried to master themselves and deal with the sounds in their own way. Delen and Way-lynn tried to destroy the orbs but found that had little effect. Gwyn and Daqiq fared much better using their discipline and self-control. Jax tried her best to sing with the music of the orbs and ease the effects for herself and the others.

After a few moments of concentration, the sounds stopped for Gwyn and Daqiq. Eventually they realized that destroying the orbs had no effect and only caused the process to reset. Banoc noticed that a circular icon became illuminated when the first person stopped hearing the music. He began to suspect the nature of the tower.

When they moved to the upper level of the tower and found it to be almost completely bare; an echoing space tiled with wide slabs of white marble. The walls of the massive chamber seemed to be the curved walls of the tower itself. Swords, axes, polearms, dirks, spike gauntlets, and more esoteric weaponry hung along the wall in a display that traced the entire circumference of the room. Against the far wall, three curved walls blocked a direct view of a circular arena in the center of the chamber. On each wall, was a single icon – a sphere, a scythe blade and a pillar. The spherical icon was illuminated.

The other two main levels of the tower contained two other tests – one involving dozens of scythe blades suspended on lines of magic and the other a massive room that had its floor composed on dozens of moving pillars. In each case the objective was to cross the room and Daqiq was able to do so with ease. Each success caused an icon to illuminate and after the third test was complete and the party returned to the upper level, they saw that a lone figure stood in the arena. 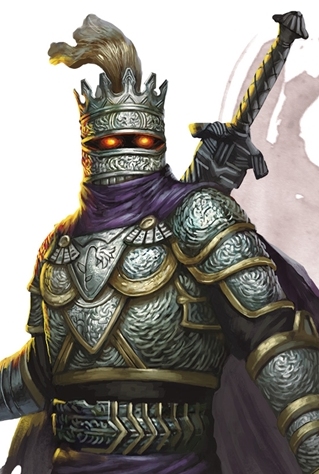 You have passed the three trials and now must face me, the Lord High Exultant. Succeed and you shall be granted fame, loose and you shall not be remembered at all.

Never a group that backs down from a challenge, they decided to face the Lord High Exultant and tried to best him. He proved to be a formidable master of weapons and magic, but not a match for the combined power of the party. He was defeated, collapsing into a pile of bones, his large black sword clattering to the ground. The group recovered weapons and armor from the room and Way-lynn claimed the sword.

The group determined that the most direct route to the southwest tower was going outside the towers and bridges and braving the dark, shadowy land itself. Along the way the encountered a skeletal work crew and a patrol of zombies. Both of which were quickly dispatched without serious injuries to the party.

The freezing cold outside made the passage exhausting for all as the very warmth of their souls felt as if it were being drained away. They reached the nearest tower and proceeded in to the ground floor.

The Tower of Discipline
The lower level appeared to contain empty prison cells. One cell had a humanoid figure shackled below a dim light. The shackles were positioned such that the figure’s arms were stretched straight out to each side. The figure was wearing a voluminous brown robe of frayed cloth. A hood of leather was drawn over its head and appeared to be securely fastened with a silver chain under the chin. The figure was unmoving, and the head lolled down upon the chest.

Delen used his magic to summon an even larger number of undead servants – skeletons and ghouls. They party decided to free the chained prisoner who turned out to be a dray, named Torakas, who claimed to have been imprisoned here by Dregoth because he knew too much about the work Dregoth was trying to accomplish. The party decided to free him but when the did, Way-lynn attacked and slew the dray before the others could interrupt.

Way-lynn claimed that the sword they recently acquired had controlled them and forced the attack. Delen was allowed to examine the weapon and confirmed that it possessed some amount of intelligence and will. The party took the dray’s body with them and Way-lynn appeared to regain control of their actions.

Moving up the tower to access the bridges, the party discovered an elongated, pie-shaped room that had bare walls, but held many strange devices, some two dozen in all. Each device was different from the next. Most of these constructions seemed to be designed to restrain human-sized creatures so that some sort of infernal rig could be connected to them. Some devices were immediately recognizable as torture equipment. There was a rack for stretching of limbs, a table positioned beneath a set of mechanical arms outfitted with various razors and pincers, a steel harness suspended above a fire pit, an iron maiden, and a seat fitted with foot, hand and head-screws.

One of the device near the center of the chamber appears to be occupied by a corpse. Jax risked using her magic on the corpse in the hopes of getting some answers. They learned that this individual was a warrior who was attacking Moil for making pacts with a demon named Orcus. The warrior was captured, tried for sedition and died while being tortured. The spirit faded before more information could be obtained.

The party debated their next move…