City Entrance
The party cautiously moved up the walkway but before they had gone very far, the encountered a patrol of spectral warriors. The patrol appeared to be random but the party wanted no witnesses to their entrance into the city. A brief combat ensued and the spectral warriors were defeated without much trouble. Gwyn, the only member of the group that had been in Moil before, directed them as best she could. At the first intersection they turned right and headed towards a tall spire. 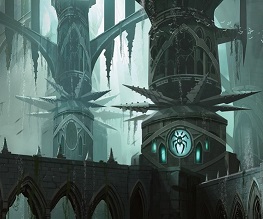 The Tower of Portals
An arched opening provided access into the side of the spire. Above the archway there was a line of symbols partially obscured by the ubiquitous ice. This tower was hollow and the spread of the darkness above was matched by the mystery of the black depths below. The bridge arched out from their position at the tower’s periphery toward the wide central support shaft for the tower. The bridges connected to this central walkway formed a network above and below.

Gwyn recognized this as her arrival point on her last visit to the city. Having a starting point, she guessed that the portal they took out of the city to the Tomb of Shadows would be in the eastern portion of the city. The layout of the rest of the city was unknown to her.

They explored the tower and found mostly empty rooms. The brief glimpses of the city showed movement of groups of undead moving around. To their horror, they even saw the Tortured Vestige on one of the bridges, but it appeared to be moving away.

The Tower of Webs
The bridge terminated on the eastern side of a silent spire. An undecorated arch allows entry into what appears to be another hollow tower. However, there is an unmistakable, greenish fluorescence shining up from below, highlighting the edges of the arch with a sickly hue. Gossamer strands of gleaming emerald wove impossibly delicate designs against the dark. Space was tight between the strands, the largest openings in the mass were no more than 5 feet wide. There was nowhere to stand except upon the glittering weblines themselves. The pale light of the webs seems to chill rather than warm; heat is only a fading memory.

Delen sent one of his skeleton servants climbing down to investigate and it found no danger in the weblines, but also nothing of interest. Delen called it back before it was too far out of his sight. Although there was some debate about trying to burn down the webbing, the group decided, at Banoc’s insistence, that it was best to leave them alone and they moved back and down another bridge.

The Shattered Tower
Time or some more destructive force had shattered most of this cyclopean tower of stone. Only a few shards of stone stood where walls once were. The entire structure appeared to be on the verge of collapse, but it was somehow still standing. Numerous catwalks provide access to what remained of each floor. The party explored this tower from top to bottom and only encountered a work crew of skeletons on the bottom floor. They avoided a confrontation and moved on to a connected tower.

The Weak Tower
This structure of stone and steel had not held up to the stress of thousands of years in the Gray. All of the metal appeared to be heavily corroded and nearly every stone was fractured in numerous places. The purpose of this tower appeared lost to time. As they explored this tower, they encountered strange creatures that appeared to be voids in space. They were susceptible to magic and Gwyn, Delen and Banoc had little trouble vanquishing them.

In the bottom of the tower they discovered a gathering of spirits that had luminous, wispy forms with wild hair that wreathed their feminine features. Delen was enamored with them and approached them while the rest hung back unsure about the wisdom of the plan. Delen conversed with them in a strange language that no others understood. Without warning they approached him and started wailing. So terrible were the cries that Way-lynn ran in fright with Jax and Daqiq chasing after him. Delen fared far worse, turning an ashen white and collapsing to the ground.

Overcome by some emotion, Gwyn moved into the room, the spectral women started to approach her and then stopped and simply stared. Gwyn dragged Delen from the room and Banoc stabilized and cured him as best he could. The two groups met back up and decided they needed time to rest and regain their strength. They found a secluded area of the tower and hoped that they would not be noticed.