The Shadow Gate
The party was surprised and terrified by the arrival of the Tortured Vestige, a horrible monstrosity created when the citizens of the city perished in the Gray. There was confusion within the group about the best course of action – to try and fight or to try and flee through the portal. Any plans they had were thrown aside as their foe reacted much more quickly than the expected lashing out with tendrils of bone and flesh piercing and entwining around Gwyn and Elleandra. The tendrils pulled at Elleandra and although she was initially able to resist, she was eventually pulled into the mass and began to be torn apart.

Kelvor dislodged some of the stonework around the portal and moved up drawing the attention of the Vestige while Kira transformed into a wolf, jumping forward to strike then shifted into a rat and fled back to the portal. Li-Am worked to disrupt the wards by diverting the energies into the surroundings. Jarvix used the Way to pull at the threads of time and daze the vestige while teleporting to the top of column where he could focus on the wards in relative safety accelerating their breakdown. Gwyn used her Veiled Alliance training to mask her presence from the Vestige and was able to use her magic to greatly weaken the barriers around the portal. Kezmit conjured spirits to allow his allies to maneuver around the rubble strewn tower. Elleandra transformed into a diaphonus spirit and slid out of the grasp of the Vestige.

Although dazed by the attack of Jarvix the Vestige was still able to lash out with more tendrils, striking Kelvor and Gwyn. Kelvor was pulled inside the of the abomination, disappearing from sight but he was still able to strike out at his foe continuing to daze it and buying time for his allies. Kira and Li-Am continued to break down the wards around the portal by disrupting the foundation stones while Jarvix continued to assault it with his mind. Gwyn was unable to break free of the Vestiges tendrils but was kept alive by Kezmit’s spirits. Elleandra, bolstered by Kezmit summoned the strength to finally break through the defenses around the gate and seeing no other opportunity, she ran through the portal, disappearing.

Continuing to be affected by Kelvor’s attack, the Vestige was only able to rip apart Kelvor, who was only still alive by virtue of his ceaseless resilience. Kelvor continued to attack the Vestige from within, pushing it away from Gwyn who was finally able to break free of its tendrils. Kira and Li-Am jumped through the portal while Jarvix made an attempt to pull Kelvor out of the mass of undeath. He was not able to affect the Vestige and jumped off the platform into the portal. Gwyn and Kezmit also fled into the portal leaving Kelvor to be torn apart even as his attacks pushed the vestige off of the spire. 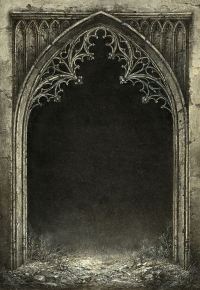 Elleandra and the others struck a hard floor as they passed through the shadow gate. The impact knocked Elleandra unconscious but she recovered, although still badly injured. Looking around the party found themselves in a vast domed chamber with a circle of runes in the ceiling marking the portal through which they just passed. A great stone dragon skull was carved into the floor beside the party – its eyes blank and mouth opened to reveal a space of dead black within.

This darkness in the mouth swallowed the light of the glowing runes that covered the walls- the same sort of sigils that were seen in the Garden of Graves. A dozen glowing stone archways were set around the chamber, each with white mist swirling inside it. Between the arches, some twenty well-rotted humanoid corpses could be seen hanging from the ceiling, entwined by chains that were dripping black ichor to the floor.

More confused than ever, the party began to look around the room inspecting the archways and the carved dragon skull. They were interrupted when a large dray dropped from the chains above, wounded but alive. The dray, who introduced himself as Iorskan, claimed to have no knowledge of this place and little memory of his arrival. There was mutual distrust given some of the party’s encounters with the dray warriors of Yarnath and their general reputation for being ruthless mercenary warriors. However an uneasy alliance was struck in the interests of self-preservation.

As they continued to explore the room it became clear that the magic of this chamber was similar to that of the Garden of Graves and the ziggurats of Kalak and Kalid-Ma – dragon magic. They attempted to discover the nature of the archways and found that they radiated many different types of magic, but mostly teleportation. The general consensus of Jarvix and Iorskan was that the dragon skull looked similar to sigil of Dregoth, the slain sorcerer-king of Giustenal, although the eyes were not closed.

As they explored, several of the party had visions of different locations, similar to the visions that were had in the Garden of Graves. Three visions were repeated during this exploration…

With a shimmer, the ever-present necrotic seepage from the walls vanished, replaced by pale green vines and gray mold. The air washeavy with the scent of decay.

The stillness of dusty stone replaced the dread darkness. Emptiness pervades a desolate ruin, its decaying walls untouched by life or magic.

The stones of a floor were inlaid with sigils and holy symbols, most unrecognizable. Faint on the air, a lament in an unknown tongue carried echoes of a nameless dread.

Jarvix was the first to go through one of the archways, hoping that it would be a way out. Instead of an exit, Jarvix found himself inside the dragon’s mouth injured. A number of other portals were explored by Jarvix and the other, none of which were an exit from the room. During the exploration, the group was attacked by two wraiths which emerged from the shadows. Kezmit’s pouch, a gift from Evan, proved useful in making the ethereal creatures vulnerable to attacks. The two wraiths were quickly defeated with only minimal injuries to the party. The exploration of the archways continued…

Coming to the realization that the portals were likely too dangerous for further exploration and unlikely to provide the exit they were seeking, they returned to their study of the dragon skull. Kira and Gwyn thought to focus on the eyes, which were unusual for this icon in that they were closed. With some trial and error it was discovered that the eyelid could be damaged. Li-Am was finally able to break the eyelid, causing the darkness in the dragon’s mouth to fade, revealing a portal. Without any hesitation, they party jumped through the portal before it could close.