City of the Dead
The party was trapped by the zombie patrol, but Kira and Gwyn finally caught up with the rest of the group and were flanking the zombies. Most of the zombies were easily taken down, Kira in her tiger form was able to quickly dispatch three of them. However, their limbs continued to grasp and harass those that had slain them and inflicted several wounds before they were finally quieted. Other zombies had chilling breath which sapped the strength out of those that felt its touch. During the fight Kelvor used his crown to summon a spirit of wind to buffet several of the zombies. Elleandra likewise gave into the temptation to use the crystal and utterly destroyed one of the more powerful zombies, using some of its energy to reinvigorate herself.

During and after the fight, Kezmit noticed that the deep chill of Moil was dampening his healing magic. The precariousness of the situation was not lost and they resolved to move through the ruined city as quickly as possible. As the party continued to explore the ice-shrouded city of shattered spires, hoping that each turn ultimately lead them closer to their destination – whatever that might be. As they traveled the city, they saw another group of ghosts moving parallel to them, however, the paths never crossed.

On one bridge, they came across a force of skeletons hauling crumbling stone in an effort to rebuild the bridge. Although they took notice of the party, neither the workers nor the overseers made an aggressive move. Jarvix used his skill in the Way to dispose of the majority of the workers and Li-Am helped mop up the rest quickly and efficiently.

As they moved through the ruined city, gray lightning continued to provide poor illumination but allowed for glimpses of the hundreds of spires spread farther across is the distance, their shattered bridges out of reach. Flying high above a great winged shape could be seen, however it either did not notice the party or care, as it never investigated. 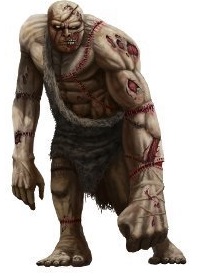 The next large tower that the party encountered had been sheared off at an angle, as if it had been struck by another spire. As they approached they noticed movement in the rubble – bones and body parts began to knit themselves together into a larger humanoid figure which approached them.

Li-Am was able to use his magic to lock down the creature, preventing it from moving into a more advantageous position. However, Kelvor drew the brutes attention and it began to crush him with its huge hands. Elleandra conjured a sphere around the creature making it experience pain with each of its attacks. Jarvix was finally able to deal a killing blow to the creature. After the fight, the group was exhausted and risked a short rest, although the lingering cold of the city prevented anyone from truly regaining all of their strength.

Moving on from the battle with the stitched monster, a quick series of lightning flashes allowed them to glimpse a boiling sea of black mist surrounding the base of the towers a hundred feet below. Far below the party spotted a group of zombies marching along one of the bridges. They were too far away to pose a threat and the group decided not to linger.

The Shadow Gate
At last the party reached what they assumed was their destination. The fallen spire before them was open to the darkness. Its central stone core appeared to have been cleanly broken to create a platform of glowing black stone. The party moved closer to the glowing platform but stopped when they realized powerful spellcraft was protecting the portal against access. Those familiar with warding magic all agreed that the wards were newly made, perhaps a few weeks ago.

As they continued to study the glowing platform, they determined that it was imbued with powerful planar and teleportation magic. Although they were convinced that it was a portal to somewhere else, they could not determine the destination. Hopeful that if they could breach the wards, they would know more, they started to work on taking down the defenses.

Before the first attempt could be made, they were interrupted by a sound from behind them. Turning they saw a massive shape composed of dead creatures climbed up from beneath the platform to block the bridge. Close to 20 feet in diameter this horrible swarm of death moved quickly to attack, with tendrils of bone and flesh flailing around it. A host of voices screamed in a twisted chorus of pain and fear.

That is a massive creature, too bad Morg isn’t with us.