The Search
The group quickly discovered that their task of finding knowledge about Dregoth’s plans would be hindered by enchantments placed on the library. The books and other writings could not be removed from the library and they appeared to be enchanted to return to the shelves after about an hour or so. Finally, the information on a particular topic appeared to be spread out across several different works, requiring both to be found and brought together for translation. Only then could the meaning of the work be determined and hopefully provide useful information.

The party started searching for writings until pairs were found after which the difficult task of translating the works fell to Torakas and Jax. Torakas, Thea and Gwyn had the difficult task of comprehending the esoteric knowledge described by the writings. Banoc and Way-lynn spent the majority of their time searching for writings. Daqiq was instrumental in organizing their findings to help them remember where various writings were located for future reference. The task was slow and exhausting, both mentally and physically, for everyone.

After being interrupted by a skeleton work crew, they spent some time checking on the entrance to the library and trying to secure it against more interruptions. They found, however, that the spectral undead of the city were easily able to move into the library and a second fight almost destroyed several of the writings after Gwyn unleashed are blast of fire.

During that fight, Thea gave into the urging of The Blade Perilous, and attacked Torakas. Horrified by her actions she surrendered the sword to the dray artificer who agreed to take up the weapon, as he had wanted all along.

Things That Go Bump in the Night
After about 12 hours, the party decided to stop and rest. The physical stress of running around the library, the mental exhaustion from the reading and the constant threat of attacks had taken a toll on them and they decided it would be most productive to take a break and rest. They posted guards at the library entrance and, mercifully, they had no spectral visitors to interrupt them.

After eating a bland meal prepared by Torakas, they resumed their work. The party also felt the effects of the Gray and they each knew that they were dangerously close to being overwhelmed. Thea’s condition worsened although she did not let on to the others in her party and carried on as best she could.

Shortly after the resumed work, a pounding was heard and felt on the main library entrance. It was as if numerous fists were trying to beat down the door to gain access. Way-lynn and Banoc shifted their attention to making sure the door held. While this allowed the others a safe working place, the constant pounding did little to help them concentrate. A few hours later there was an increase in the intensity, as if more creatures had arrived. 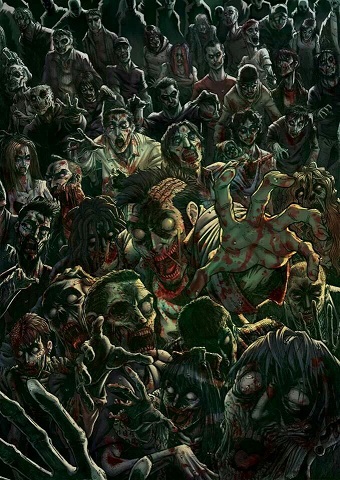 Jax and Thea took the last remaining work to be translated and studied to the back of the library, while the rest made ready to open the doors and face whatever was out there waiting for them. With luck they would be able to defeat the creatures and make it to the Spire of Black Ice before being overwhelmed by the Gray.

They piled many of the flammable materials in front of the doors. With everyone as ready as they could be, they pulled open the doors and saw a horde of zombies which started to rush in…