A New Direction
While the party rested, healing their wounds and allowing Thea to recover from the effects of the machine that brought her back to life. The debate was between leaving Moil as quickly as possible or making their way to the library of Dregoth in the Shadow Gate Tower. The party was evenly split on what they thought was best, with Thea deciding to go along with the majority. Eventually Gwyn was convinced by Torakas and Jax that the library was the better option and the group headed out towards the northeast corner of the city.

The group moved with as much speed as they could with Daqiq leading the way and attempting to avoid any undead they might encounter. He was able to avoid groups of banshees and zombies but stumbled directly into a skeletal work crew. They also spotted the Vestige, or a similar creature, roaming the bridges of the city. They were terrified by the through that they had not defeated the creature or that there were multiple vestiges within the city. 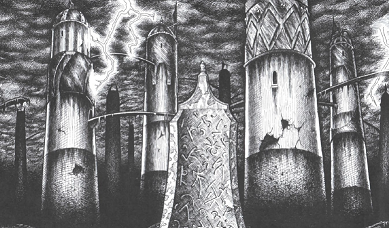 Temptations
After several hours the party moved into into a tower the Torakas referred to as the Tower of Chance. In one room, a mysterious wheel floated above a table. Although they were hurried, Way-lynn gave into temptation and activated the wheel. The wheel came to a stop and Way-lynn visibly aged from the magic of the wheel and the rest of his friends could see that his health was affected as well. Torakas provided an elixir that restored most of his lost youth, but Way-lynn still felt weaker than before.

Torakas also spun the wheel hoping that he would have better luck than Way-Lynn. Much to his dismay, the wheel did not land on the number he selected and he was wracked with pain as the device drain energy out of him, leaving him tired like he had never been before. The decided to move on, not trusting that the wheel would ever provide a benefit.

In the shadow mine tower, they encountered a strange room with obsidian eggs on an alter. Banoc detected magic within them, but was unable to determine the functions of the eggs. After the dangers in the Tower of Chance, they decided not to tempt fate and left the eggs undisturbed.

As they left the mine, they were attacked by another group of banshees and this time they had no choice but to fight the spectral creatures. The banshees’ screams knocked Banoc, Thea and Way-lynn unconscious and into a near-death state. The creatures were eventually defeated and the party was able to revive their allies and heal up.

The Shadow Gate Tower
At long last the party reached the Shadow Gate Tower and it was still as Gwyn remembered. The tower had been struck by another falling tower and the top was broken off. The faint glow of the portal to the Shadow Tomb was barely visible from the bridge as they approached. They worked their way inside and discovered a recently renovated room that appeared to have once been a chapel. The original iconography was dedicated to a creature that Thea knew as Orcus, but had been replaced by a symbol of a dragon skull within a sun – which Torakas confirmed was the symbol of Dregoth.

They also discovered that the interior of the tower had been badly damaged in the collision and there were no access points to the lower levels where the library was. They made their way to the top most level and avoided the Shadow Gate. From the edge, they peered over and saw some damaged walkways on the exterior of the tower and several access points that might lead into unexplored portions of the tower. However, they couldn’t see if the access points had been damaged from their vantage point.

Gwyn surprised all of the others as she sprouted dragon wings from her back and launched off the side of the tower to explore. After a few minutes, she returned and confidently said that if they could get down, they could access the lower level of the tower. Thea also surprised the group as she produced a set of ethereal, feathered wings and made the initial descent with some rope to help the others. Everyone was in awe of the newfound abilities of Thea and Gwyn.

The descent along the outside of the tower was treacherous and Banoc and Torakas both fell but landed on the ruined scaffolding only suffering a few bumps and bruises. Once they all reached the lowest access doorway, they entered the tower again and quickly discovered the library, which occupied a large portion of the ground floor. The room contained a vast assortment of books, scrolls, tablets and other forms of written information. The walls and rooms were demolished at one point, but recently renovated and are in rather good condition, considering the state of the rest of the tower. They realized that finding the library was only the first step and that sorting through the information contained here could take days.