A Parting in the Mists
The unlikely collection of individuals stood in the Mists unsure of their surroundings. Eventually Laylon-Ka spoke and asked Vinara and Morg to join her and a number of the surviving members of her resistance group to determine the final fate of Kalid-Ma, for she was not convinced that he had truly died. She asked that two of her newer members, Kezmit and Li-Am to stay with Gwyn and her allies for their protection as well as a possible means to keep communication open.

Vinara and Morg accepted her invitation and they walked off into the Mists. Those that remained behind were very confused regarding the final events and what happened to shadow Kalidnay. Evan Moreau attempted to explain although the fine details were lost. He suggested that the lands are tied to powerful individuals and if they die without another suitable replacement, the lands, and sometimes people, disappear into the Mists.

Intending to make good on his bargain he made with Jarvix and Elleandra, Evan invited them back to his library where he could research a way to send them back to Athas. After all agreed, Evan created a glowing circle of sigils on the ground nearby, and a hazy vision of dark room lined with books could be seen. Kira Javed, Kazandra and Melantha stepped through together with the others following them.

The Moreau LIbrary
They arrived in a cool, dark, slightly musty room filled to the ceiling with book shelves, a sight that few had ever thought possible. Melantha quickly and quietly escorted Kazandra out of the room without so much as a word to the others. Evan told them that they were in his private library in the ruins of his families estates in a nation called Dementlieu. He then excused himself to research how to get the party back to Athas. Kira escorted the group around the library while they waited for Evan and the group took advantage of the opportunity to learn as much as they could on a number of topics that were of interest.

Kelvor was keenly interested in what they could find out about the gods. They learned that in this land they gods were real, or at least those who worshiped them were granted extraordinary powers. They learned of Moradin, the god of dwarves, and found some cryptic and disturbing information on the Chained God. They also learned that the primordials lost the war with the gods in this land and thus their power remained.

Kezmit was very curious as to how Kalidnay appeared to exist in two places with two different histories. Kira explained that there were many tales of outsiders to her lands that appeared out of the Mists. They sometimes spoke of strange sounding lands that none here had ever heard of. Kira and Evan believe that strong events of evil can draw the Mists into other worlds and rip the lands into their own. Thakok-An’s betrayal of her family and the powerful magic of Kalid-Ma could certainly have been strong enough to attract the attention of the Mists.

There was also interest in the nature of Kazandra and the similarity between her hunger for blood and that of Sacha and Wyan. Kira did not think that the two were the same type of creatures, for in her experience, a beheaded vampire was a dead vampire. They still wondered what would have happened had they allowed the floating heads to drink from them in the depths of the Ziggurat of Kalak.

Evan returned from his research and they discussed his findings over a meal of strange foods with strange customs. The formality and decadence, compared to most meals they were accustomed to, was amazing, as were the metal utensils used to eat the food. Although it was strange to them, they found it agreeable and this small comfort after so many hardships was very welcome.

Evan informed them that he could not find a way to return them directly to Athas as such magic was beyond him, if it was possible at all. He had located what could be another source of magic from Athas and believed that if they investigated it, they might find a way home. Unfortunately the source of this magic was located in the city of Moil, know as the City that Waits, a place where the dead have consumed the living. Having no other viable options, the group decided to search Moil for a way home.

Before they left, Evan presented Gwyn and Kelvor with magical rings and also gave Kezmit a pouch of bone dust that would aid them in fighting ghosts and other immaterial creatures. Evan was able to instruct Jarvix in the rituals to open portals between magic circles. Although of limited use at this time, should they encounter these circles in Athas, it could be a substantial advantage. With that, Evan opened another portal to the city of Moil and they bid their farewells to Evan, including Kira, who decided to take a leave of absence from her studies with Evan and accompany the party. 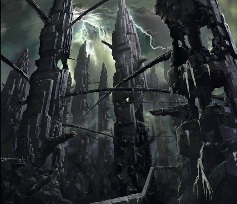 When they stepped through the portal, an ice-shrouded city of shattered stone spires and decaying arched bridges came into view from out of the swirling grey mist. Gray lightning occasionally surged within the clouds providing some illumination. and a boiling sea of black surrounded the base of the tower a hundred feet below. Several other spires connected to the one closest to the group, but uncounted hundreds more spread further in the distance, their shattered bridges out of reach.

Freezing air and a sullen darkness enveloped the party as a series of fractured black columns come into view when they adjusted to the dim light. The cracked stone floor sloped steeply down toward an archway opening onto a dead black mist, and above them a partial domed ceiling framed the sky. However, the howling creatures lurching forward to attack were a more immediate concern. The experienced adventurers were able to brace themselves for the attack and made short work of their opponents. Jarvix conjured shards of nothingness to hold fast the zombies while Li-Am’s was able to conjure waves of flame that blasted his foes. Two of the creatures had powerful chilling claws and Kelvor nearly perished before he was able to shake off the effects. In fact most of the party were unable to shake off the lingering wounds in this cold realm.

The group began to explore the city, slowly making their way across the icy bridges, even watchful for enemies or signs of the magic they were looking for. Elleandra and Gwyn were able to navigate slightly within the strange dead city, but so much was ruined that there didn’t appear to be a direct path. Along the way they saw many groups of different types of undead, including a large formation of tightly packed bodies slowly making its way across a nearby bridge.

At an intersection of bridges, the party barely avoided an unpleasant surprise by a group of several different types of spectral beings. The party was harassed by the banshee’s cries, the necrotic aura of the wraiths, and the nighthaunt’s constant attempts to feed off of their very souls. Kezmit chose not to use the limited supply of bone dust on these foes and the party was fortunately able to vanquish them.

The party moved on, heading to the northeast, in the general direction of the dragon magic they were attempting to find. Unfortunately the bridge they were on collapsed partway to their destination and there was no method of crossing it. Before they could turn around, the adventurers were set upon by a group of zombies that appeared to be patrolling the city…