Outskirts
The group took in their surroundings and recognized that they were in the northern outskirts of the city, a relatively deserted section. From their position they could see the Ziggurat of Kalid-Ma and noticed that the top of the structure was slightly different from what they remembered, although no details were visible at this distance. There was still some general confusion as they were all under the impression that the land of Kalidnay in the Gray had dissolved following the death of Thankok-An. Kira had no answers other than that the Mists work in mysterious ways. 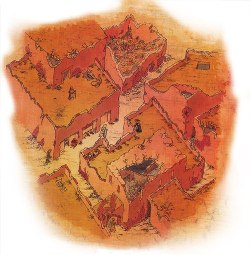 Eager to find Vinara and Morg, Jarvix sent out a telepathic message to Morg, telling the Mul of their location and asking him to come find them. Within a few minutes Morg replied, asking Jarvix to stay put and letting him know that the resistance would be coming with Morg. Feeling they were safe, for the moment, the group set about tending to their wounds and recovering from the fight against Dregoth. During their rest, Kira heard heavy footsteps approaching their position.

Instead of Morg and Vinara, the party was surprised to see a templar and a retinue of half-giant and human guards. The templar asked for the party’s surrender and although she was refused, she didn’t order an immediate attack. Elleandra attempted to ask questions of the templar but was dismissed. Similarly Iorskan’s attempts to intimidate them were met with failure as well. During the conversations, Jarvix noticed that all of the guards and the templar were wearing identical symbols, one that reminded him of a piece of jewelry worn by Gwyn’s mother, Marisol.

After the templar mentioned in hushed tones that she would take them to the resistance, the two groups agreed that the party would be allowed to keep there weapons as they were escorted through town. Although suspicious, the templar appeared sincere so they set out. Their winding path through the back streets of Kalidnay were taking them closer and closer to the Ziggurat. Kira was the first to notice that atop the structure several bodies were apparently on display. This observation was shared between her, Jarvix, Li-Am and Iorskan before the half-giant guards caught on.

Feeling they had been duped, Jarvix used the Way to control one of the half-giants and make him attack another. Chaos quickly ensued but the party was able to defeat the templar and her guards quickly, although Iorskan was badly injured during the conflict.

As they took a quick rest in an abandoned building, they realized they were close enough to the Ziggurat to make out the differences. Several bodies had been staked to the top, on display for the entire city to see. There appeared to be two women and one man, along with an insect of some type.

The Ziggurat
The group moved out of sight and pondered the strange turn of events. Jarvix was certain that he had contacted Morg and that Morg had replied to him. Iorskan suggested that Morg, whom he had never met, might have betrayed the party. None of the party was willing to entertain such a notion. While they rested they took the patrols clothes for disguised, with Kezmit and Li-Am posing as guards and Elleandra masquerading as the templar.

Jarvix sent another message to Morg using the Way, asking what had happened and for them to meet back at their initial location in the outskirts of the city. Morg quickly replied that the templars are everywhere and that he and the resistance members had to deal with a patrol. Again Iorskan scoffed and voiced his concerns that Morg had turned on them. Again the rest of the party dismissed the notion.

The party head back towards the edge of town, avoiding any encounters with the population as best they could and pretending to be a templar and her prisoners when needed. They were successful and their subterfuge appeared to work. At the last minute, they decided to go to a different building and see if there was an ambush at the original meeting place. Kira was able to change forms and sneak into the building, discovering another templar patrol, larger than the last.

Upon Kira’s return, the party could no longer deny that they were compromised in some way, although none, except Iorskan, were willing to believe Morg had turned on them. Jarvix sent another message to Morg, for final confirmation, saying that they had been held up by templars and needed to meet at a new location. Much to everyone’s dismay, the templar group waiting to ambush the party moved out within a few minutes.

They decided that the Ziggurat would be the most likely place to get answers, as they were determined to know who or what had betrayed them, as well as to confirm the identity of the bodies atop the Ziggurat. As they marched through the streets they overheard a few conversations and learned a bit about what had been happening over the last few weeks.

Marisol had risen to power following the death of Thakok-An and the entire city had been converted to be followers of the Shadow King. Marisol had been instrumental in defending the city against demon attacks, so the populace said, and had squashed a minor revolution. She had reopened the games and a new champion of her, a mul, had been undefeated. Many of the citizens were eager to see a match scheduled for that evening.

Deciding that the best course of action was to infiltrate the ZIggurat, the group used their knowledge of the secret entrance into the jail to slip past the main guards. Once inside, they were able to use Elleandra’s charms to get past the guards and head to the top. The Ziggurat was not heavily occupied, so they had little trouble reaching the top. There they found answers they didn’t want to find. The bodies of Vinara, Bear, Kalid-Ma (whose head was attached once again) and Laylon-Ka were impaled upon spears.

Within moments of setting foot on the top of the Ziggurat, Jarvix and Elleandra sensed a psionic alarm sounding and suddenly the top of the Ziggurat was filled with a large number of new arrivals. Marisol was at the center of a group of half-giants, templars and guards. In addition there were a number of gladiators lead by a Mul with an eye patch wielding a large metal axe and a spear – Morg. There was no time wasted with false pleasantries and viscous combat ensured.

The party focused everything on taking down Morg so that they could use the Orbs of Kalid-Ma to escape once he was unconscious. Their opponents were attempting to divide and conquer the party and the combination of military training and gladiatorial skills were quite effective. Marisol briefly dominated some of the party, but her control over Morg only allowed it to be temporary. During the fight Kezmit was knocked over the edge of the ziggurat and fell down several levels. Just after that Morg was knocked unconscious and the rest of the party joined hands while grabbing him and Elleandra used the orbs, leaving Kezmit behind.

The Ruins of Kalidnay
The world was whirling about them and everyone was briefly overcome with a sense of nausea. The world quickly settled and they found themselves in the outskirts of the ruins of Kalidnay looking towards the center of the town at the Ziggurat. There were no bodies impaled atop the structure, the sun shown bright and the pervasive sense of dread and fear that all experienced while in the Gray vanished. They were back in Athas.