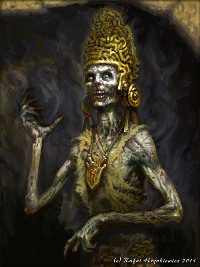 Laylon-Ka, Morg and Vinara set out into the Mists with the remaining member of the resistance cell in the hopes of finding out the true fate of Kalid-Ma. Their sense of time and distance was distorted by the Mists, but it felt like they had been traveling for days before Laylon-Ka announced that she had picked up the trail of the sorcerer-king.

The group arrived quickly at the outskirts of a city they knew well – Kalidnay of the Gray, a place they thought had been absorbed by the Mists. Unsure as to where, or even when, they might be, the group set out to investigate the present situation by making contact with the resistance cell that Laylon-Ka commanded. As they moved through the city, careful to avoid any inhabitants, they noticed subtle differences from they city they had known before. However, Laylon-Ka was able to quickly locate members of her resistance cell.

Once getting to a safe house, they learned some information that raised more questions then it answered. None of the resistance members had any memory of the lands dissolving into the Mists, it was as if the event never happened for them. Although they remembered the fight at the resistance compound the destruction of the land apparently never happened for them. A new high Templar had stepped up to bring order to land – an elf named Marisol.

What they learned about Kalid-Ma only added to their confusion. Marisol had taken over following the death of Thakok-An and proclaimed that the city was now under the protection of Shadow King of Nibenay. Marisol had proclaimed that with the power of the Shadow King, she had defeated Kalid-Ma and his body was mounted on the top of the Ziggurat as a warning to those who would defy her.

The Ziggurat of Kalid-Ma
Intrigued and concerned about these events, they decided to try and sneak into the Ziggurat and verify the claims. Morg and Vinara knew of the secret passage from the outside into the jails on the main level and felt that they could sneak in, confirm the fate of Kalid-Ma and possibly deal with Marisol.

In order to minimize the chances of meeting heavy resistance, they hatched a plan to create diversions across the city and draw out as many guards as possible. Vinara used her training from the Wastewalker to create a storm of obsidian shards while other member of the resistance group started fires and other disruptions throughout the city. As expected many groups of guards were seen moving from the Ziggurat out into the city to restore order.

When the the timing was right, Morg, Vinara moved into the Ziggurat with Laylon-Ka and a few other resistance members. They were able to access the secret door and enter the jail room without trouble. However as they moved through the Ziggurat, they encountered a few guards. The battle-hardened party was able to defeat them without much difficulty and without raising any alarms.

At the top of the Ziggurat, the party came upon the body of Kalid-Ma, staked to a wooden frame, his head reattached with only a scar to indicate it had previously been removed by Morg’s axe. His body was still in the same preserved, catatonic condition as when they last saw it. Before they could act, Marisol materialized with a number of half-giant guards. 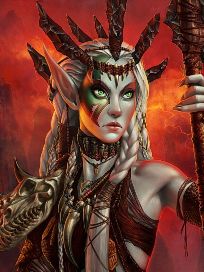 Recognizing Morg and Vinara, she wasted little time and sent her guards in to attack, while she remained at a safe distance. The brutal half-giants were able to defeat the resistance warriors without difficulty. Marisol was able to overcome Laylon-Ka and the Kaisharga collapsed to the floor. Once Morg and Vinara had defeated a couple of Marisol’s guards and moved in to attack her, wounding her with a devastating strike that left a large cut on her face. She was able to use her considerable talent with the Way and focus on Morg, dominating him.

Morg was forced to turn on Vinara and the two friends battled each other – Morg attempting to kill Vinara while Vinara attempted to defend herself and break the control Marisol had over him. In the heat of the combat, Vinara lashed out at Morg with her Heartwood Spear and it jabbed his face, taking out one of his eyes. Despite the injury Morg and the half-giants were able to wear down Bear and Vinara, and under the command of Marisol, Morg landed a killing blow on Vinara. Morg collapsed to the floor, tears streaming from his eyes, while Marisol watched with a wicked smile on her face…