The Plan of Attack
The Sinful Kraken headed east towards the Sea of Silt without incident until the early afternoon when they encountered at mudflat. Regulus asked the party to spend some time and explore the mudflat, as they often contain water and possibly vegetation to help provision the ship. Banoc didn’t sense that there was any ill intent, but had noticed a growing tension between Regulus and his pirates and Iulius and the legionary troops. However, all three groups needed each other, so the uneasy alliance held.

On the mudflat, the party discovered some relatively clean water but no plant life, suggesting that the mudflat was relatively new. While they were gathering the water, they were set upon by a small group of black silt horrors that burst from beneath the mud. Although initially caught off guard, they creatures were defeated without too many injuries being taken. In less than an hour, they were back underway.

Later in the afternoon, Iulius approached the party and wanted to know more about their plans for bringing about a new age of Athas. As a strategist and military captain, he was apparently uneasy about not knowing their plan. The group described many of the wonders that they had seen in their encounters including the other planes of existence, the knowledge of the true history of Athas and the powerful weapons useful for taking down the sorcerer-kings. These stories, along with the camaraderie with Lena and Way-lynn helped dispel his concerns.

Iulius shared that the stories of the giants preparing to march on Balic were a ruse to keep the citizens in a heightened state of alert. An unknown army had sacked Tyr and was marching towards Urik in the north. According to Iulius, the forces of Gulg and Nibeany were marching towards Urik as well to defend it against the unknown aggressor. He was terrified to think about what creature or army could be such a threat to Urik that two other sorcerer-kings would be willing to set aside their differences. Gwyn and Banoc recalled the tales of the sorcerer-kings moving to destroy Dregoth thousands of years ago and thought that it could be a similar situation. Banoc remembered the legends of Kalak of Tyr, Hamanu of Urik and Borys the Dragon marching on Kalidnay to stop Kalid-Ma after his transformation. With the two city-states the targets, and the forces moving from the south, they felt like the unknown aggressor might be Kalid-Ma.

Threat From Below
Early the next morning, just as dawn’s light was starting to show, Gwyn was on watch and noticed a disturbance in the silt headed towards the Sinful Kraken. It was quickly revealed to be a gray silt horror, a huge beast far more powerful and deadly than the silt horrors encountered in the mudflat. Thanks to the keen eyes of Gwyn, she and her friends had time to prepare for the attack. The horror lashed out with barbed tentacles that threatened to pull them overboard. Way-lynn started hacking at the tentacles, severing them with each powerful blow from their axe. Gwyn and Banoc launched fire spells at the creatures body, while Daqiq shot one deadly arrow after another into its partially exposed head. Just as it was about to pull Jax overboard, it was defeated and sank beneath the silt.

Later that day, while Lena and Daqiq were learning about the operation of the psionic orb Regulus approached the others to complain about Iulius and his soldiers making too many demands on the pirates. They listened to his concerns and attempted to smooth over the differences, emphasizing that they all needed each other at this time. After promising to speak to Iulius and get him to ease up a bit, Regulus appeared to feel better about the situation. Iulius and his men were unhappy about the perceived lazy attitude of the pirates but was eventually convinced that the common good would require sacrifices on everyone’s part.

Threat From Above
Just as things were starting to calm down, Daqiq noticed a large bird diving for the Sinful Kraken. The bird, a roc, was moving fast and they only had moments to prepare. Way-Lynn and Lena manned the ships weapons and fired at the gargantuan bird of prey. Although the bird was struck several times and shot by Daqiq, it was barely injured and dove towards Jax, biting her and grasping her in its talons. As it flew off it took more hits but still held onto Jax until it was over a hundred feet in the air when it let go. Luckily she landed on the deck of the Sinful Kraken instead of the silt. A final arrow from Daqiq finished off the bird and it fell into the Sea of Silt.

The crew and adventurers began to wonder if something wasn’t putting its will against their own. Each of these encounters would not be a cause for concern, but together it appeared to be suspicious. Although they were concerned, there was nothing to do but keep moving on towards the east. 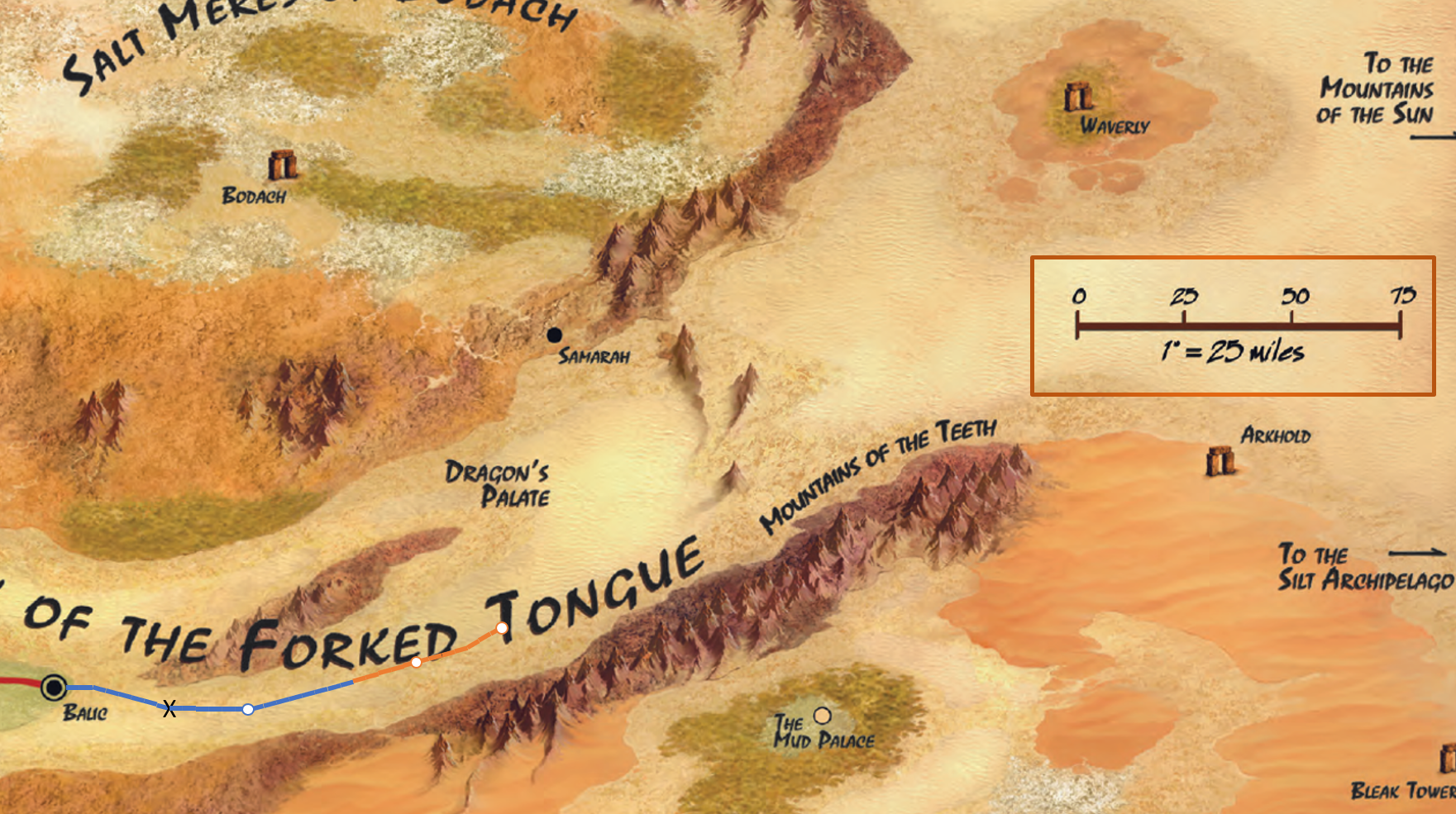